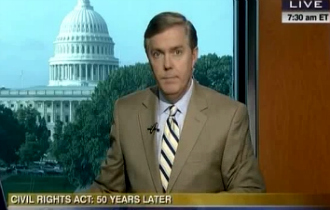 When C-SPAN’s Washington Journal invited viewers to weigh in on the 50th anniversary of the Civil Rights Act, several callers phoned in to advocate for “white pride,” suggesting that black people owe an immense debt to white people; and that society ignores discrimination against white races like the Irish and Italians.

Caller “Thomas” from Maryland explained to a straight-faced host Steve Scully that he is “much less liberal” now than he was during the 1964 passage of civil rights legislation.

In the clip, originally flagged by TPM, the caller continued:

I think the blacks have brought on most of their present-day problems themselves. They insult white people. I’ve heard it right here on your own show, some black called Karl Rove a “white boy.” And I don’t think that’s right. They’re attacking white people in the big cities and we’re supposed to put up with that kind of stuff, and like them, and say, “Well, come on into our neighborhood.” And how about the discussion of the black crime that goes on in this country? You people never will discuss that. And you won’t discuss discrimination against, uh, how about the Irish, they were discriminated against. So were the Mormons, the Italians.

Asked whether he’s felt any discrimination himself, Thomas told Scully: “Yes, because I am of Irish descent I have felt it.”

The next caller, named “Danny” from Ohio, echoed similar feelings:

I think there is a war on white men in this country from liberal white women that claim there is a war against women. No country has ever created more things for the betterment of mankind’s living than the caucasian race that came from Europe and I’m sick and tired — as an octogenarian — hearing all this bad-mouthing of white people. […] I think it’s time for white men to start standing up because there’s all kinds of groups for other races. And I think it’s time for white pride. We have built this country — Irish, Italians, Germans, Irish, wherever they have come from, from Europe. No country in the world has produced what the white man has produced for every culture and race in America.

The final caller of the trio, “Terry” from North Carolina, agreed with his predecessors: