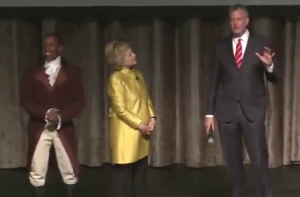 On Saturday night, Democratic presidential candidate Hillary Clinton and Bill de Blasio made a joke that riffed off the racial stereotype of “C.P. time” or “colored people time,” that blacks are always late. As early as Sunday morning, video of the joke was online. The moment received extensive online and print coverage, including criticism from liberal outlets like Jezebel, New York Daily News, Gawker, Salon, Raw Story, and Fusion.

But if you get your news from cable networks, you’d be forgiven for not knowing that the moment even existed. A search of the major three cable news networks finds that in the 60-hour period since Saturday night, there has been virtually no media coverage of the “C.P. time” joke.

As of this writing, Fox News has covered the joke twice, the first time on Red Eye (which airs at 3:00 AM) and the second time this morning on America’s Newsroom. Fox is the only network to have aired the joke and do an actual segment on it.

CNN has referenced the joke exactly once, when host Erin Burnett challenged de Blasio on it in an interview Monday night. “It was clearly a staged show, it was a scripted show…” he responded. “I think people are missing the point here.” After this somewhat inadequate answer, Burnett moved on.

MSNBC also referenced the joke exactly once, also during an interview with de Blasio. But Chris Matthews laughed about it and treated the entire thing as a joke. “By the way, whoever writes your jokes up there, get a new joke writer,” he smiled. “The ‘C.P. time,’ all that stuff, was a disaster.” He then moved on.

Just imagine for a second if, say, Mitt Romney had participated in that joke with a fellow Republican at the height of the 2012 election. Is there anyone who doubts that that clip would be replayed four times an hour, receive round-the-clock coverage, and that the networks would host nonstop talking-head debates about how it’s not okay for a white politician to joke about “colored people time” in the 21st Century? Nor would Romney alone be spared; countless thought pieces and op-eds would inform us how Romney’s racist joke was really emblematic of Republican Party as a whole, and their disdain for minority voters.

But Hillary Clinton and Bill de Blasio made the joke. So instead, we got crickets.

And no, it doesn’t matter that Clinton was reading off a joke someone else wrote. Presumably, the campaign vetted anything she would say that night; it would be political malpractice if they hadn’t. Someone, somewhere in the campaign infrastructure saw a joke about “C.P. time” and okayed it, which if anything makes it far more troubling than an unscripted racial outburst.

The kindest explanation I can give is that the no one in the Clinton campaign had ever heard of the term “C.P. time,” they didn’t have any black higher-ups who would have recognized the term, and Google was down. But if ignorance and obscurity is a defense for throwing around racist terms, George Allen deserves an apology for the “macaca” media frenzy.

This isn’t about whether these Democratic politicians are actually racist (they aren’t) or political correctness. Personally, I’m actually a big fan of offensive humor; my only problem with the joke was that it was painfully unfunny. This is really about a glaring double standard where one side of political aisle is bludgeoned for placing even a single toe across the line, while the other side gets to leap back and forth unscathed.

If joking about “colored people time” doesn’t warrant widespread condemnation but Romney saying something as bland as “Obama isn’t working” does, I think it’s safe to say the media no longer has any sort of bearing on what is and isn’t acceptable to say in public life. It’s hard to think of something Clinton would have to say that was more obviously offensive and would have prompted a media response. Maybe if she joked that if Gandhi was an American, he’d be working in a gas station.

Except, you know, she actually said that in 2004. Why is it you probably haven’t heard about that? Because the network media yawned back then, too.