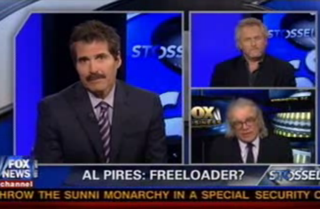 John Stossel‘s Freeloaders special calling out individuals for milking the system ruffled a few feathers, namely the “freeloaders” in question. To celebrate the outrage, Stossel invited his choice “freeloaders” back, among them colorful defense attorney Al Pires. In a stroke of genius, Stossel paired the lawyer with Andrew Breitbart, who happens to have a history with the USDA himself. Classic cable news unproductive yelling ensued.

Pires got on Stossel’s “freeloaders” list for representing black farmers attempting to receive aid for their farms from the USDA to balance out institutional racism. In the process, Pires created a new represented class that expanded the number of people who could claim subsidies exponentially. The story had been highlighted on Big Government, and Breitbart repeated the claims on his site to Pires in person: that “there were only 18,000 black farmers, only two to three thousand claims,” so Pires, in Breitbart’s estimation, expanded the class to make more money. Needless to say Pires didn’t take the claims too well.

“I don’t know who Mr. Breitbart is. He’s obviously not a farmer, he’s not a journalist,” Pires began, later calling his claims “silly” (as he says this, the chyron under him reads: “Al Pires: Freeloader?” Breitbart replied by saying the names of several relevant individuals over his bickering, later asking about Othello Cross, a former colleague who Breitbart claims admitted to fraud on tape. Stossel confirms the story independently, telling Breitbart that “I didn’t trust you either.” But the Othello Cross claims seem to get the best of Pires, who, upon Breitbart challenging him for “trying to act like he doesn’t know who Othello Cross is,” launches into an ad hominem screed for the ages:

“Who are you? Making fun of people who have the guts to take cases against the government. You don’t know anything about farming and litigation. You’re some gadfly from Hollywood. I looked you up. You’re some guy who didn’t have a job for ten years… Yeah, I know who you are. You’re some gadfly from Hollywood. You’re the son of a rich family, you never worked for a living in your life. You go around making fun of poor people, you go making fun of Indians and Blacks and Hispanics and women and I’m not putting up with it. I feel bad for you. You’re a sad, sad person. Why don’t you go get a job?”

Somewhere in the middle of that outburst, Breitbart cheekily reminds him that Pires claimed he didn’t know who he was while Pires clapped and kept shouting, among other things, “Get a job!” When asked to “come help us,” Breitbart finally took a hard shot back: “I’m helping them because you won’t return their phone calls.” Stossel, meanwhile, remains silent throughout the entire ordeal, only to finally ask Pires a question about a photo of himself lounging in his shorts in his “waterfront property.”

Truly, these are the sort of cable news segments that media junkies live for (and Howard Kurtz lives to tsk-tsk at). The segment via Fox Business below: