Being a cable news host is much like being a quarterback:

When things go well, you get all the credit.

When things go wrong, you get all the ridicule.

As we’ve seen lately and since the dawn of news in general, those sitting in the anchor chair are invariably at the mercy of his or her producers, writers, directors, editors, graphics department, and dumb luck. How many times have you felt the pain of a host attempting to do an interview with a remote guest or reporter, only for the audio to fail at exactly the wrong moment, leading to that awkward few seconds of silence and confusion until eventually transitioning to the next item in the rundown? But the worst raw deal occurs when an erroneous or poorly written graphic appears on screen unbeknownst to the host while he or she is either (A) concentrating on reading prompter or (B) interviewing a guest.

Which brings us to Ronan Farrow, who began his 1:00 p.m. MSNBC show a few weeks ago. Mr. Farrow—at the ripe old age of 26—has never hosted a program in any capacity on any level. With that resume comes risk, and despite being a Yale undergrad and Yale Law graduate, the smartest guy in the room is still only as good as the team around him. Prior experience can help compensate, but in this case, it doesn’t exist. So when Farrow read a prepared script likely written by someone else and this graphic appeared (screen-grab below), you’ll never guess who’s Twitter feed got torched in about 0.8 seconds after going to commercial: 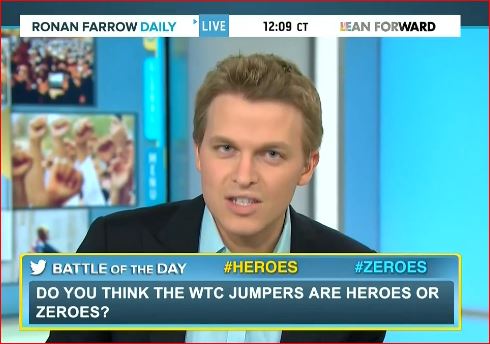 Could the host have previewed the script before the show or during a break leading up to it and asked for changes? Yes. But he is only four weeks in, and his producer should be coaching him on such things while protecting him by taking some kind of responsibility for the mistake. Of course, taking blame publicly used to be almost impossible for any producer or writer. But thanks to Twitter, more folks behind the camera should at least be making themselves accountable instead of allowing a host to become a human piñata in public. But don’t count on that happening anytime soon…it’s just not the way things are done.

As far as the other networks, rest assured that these kinds of gaffes happen at Fox and CNN as well. Just a few weeks ago, Fox actually got a graphic wrong on a spelling bee, typing it in a lower-third as “Spelling Be.” And at the beginning of the missing plane coverage on March 7th, a CNN graphic referred to the Malaysian jet as a “Bowing 777.”

If an anchor/host is the quarterback, producers and writers are the offensive linemen there to protect their highest paid, most important star. If linemen do a good job, you don’t hear a thing about them. If they do screw up…even once in awhile (a holding call or a spelling error), they get verbally waterboarded by their coaches/producers. It’s a thankless job with no room for error. This is especially true in 2014, where media-analysis publications like Mediaite hardly miss anything throughout the daily news cycle.

Here’s the bottom line: Mistakes in television have always been made. The difference now is that screenshots can be easily captured and shared on social media and YouTube videos uploaded quite easily. Errors are now longer ephemeral…they live forever and are oftentimes seen by thousands more than those who were watching live.

With each of the three major cable news networks (four when including upstart AJAM) on the air live from anywhere from 14-19 hours per day, the chances for missteps are inevitable…especially when most graphic systems don’t activate or even have a spellcheck option as a safety net. Why no spellcheck? Because more often than not, names are used in the lower-third graphics you see on your screen. And spellcheck can’t account for editorial misjudgment when referring to, say, parachuters thrill-seeking off One World Trade Center in New York this month as “WTC Jumpers” – evoking painful memories of 9/11. It’s not an intentional mistake, of course…and one that will likely never happen again on the show. But in the end, it is one member of the team (Farrow) who gets the tip of the spear because his name is attached to the show. He owns it for better or worse…that’s all part of the contract.

Fox once used a Tina Fey graphic in a Sarah Palin story.

MSNBC recently labeled a country Czechoslovakia, which hasn’t existed since 1993.

As those who read this column regularly know, even this very scribe is fallible.

And in a media world where mistakes are magnified more than ever…it may appear the underpaid and overworked aren’t doing their jobs.

But it’s a tough ecosphere where no two hours are the same and stories are constantly changing under stressful conditions.

Give the quarterbacks a break.

And if anything, give their linemen a raise.