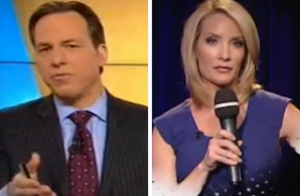 On a day when a White House reporter recited Jay-Z rap lyrics to Press Secretary Jay Carney as part of a serious question about the hip hop star’s communication with President Obama, two prominent cable news hosts found themselves unexpectedly rapping on TV. Now it’s up to you to decide who’s the better rapper: CNN’s Jake Tapper or Fox News’ Dana Perino.

After POLITICO’s Donovan Slack read the lyrics to Carney and asked if Jay-Z and Obama actually discussed the rapper’s trip to Cuba as he implies in the new song “Open Letter,” Carney snarkily replied, “I guess nothing rhymes with Treasury.” That was Carney’s way of reminding the reporter that the Treasury Department handles those visas, not the White House.

CNN’s Tapper took on Carney’s challenge directly during The Lead this afternoon, offering up his own rhyme and urging viewers to tweet their own using the hashtag #TreasuryRap. Using one of Beyoncé‘s many nicknames, Tapper delivered this couplet:

“Got cleared by Treasury. We can travel at your leisure, B.”

Later this afternoon on Fox News’ The Five, co-host, and former Bush press secretary, Dana Perino took a different approach, saying she was inspired by the Jay-Z story to try rapping for the first time. Under the new MC name “Tiny D Day-P,” she delivered rhymes about how she’s “white like Casper” and “has a dog named Jasper.”

Her partner-in-crime Greg Gutfeld called it “the funniest thing I’ve ever seen in my life.”

So, who do you think rapped better? Vote below: