Campbell Brown Defends Fox News – By Comparing Them To MSNBC 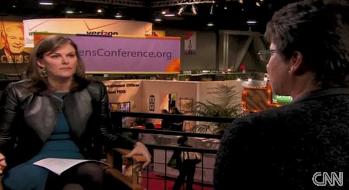 Maybe it takes another cable news network to press the Obama administration on a point of contention in this feud with Fox News that hasn’t been asked very often.

During an interview at The Women’s Conference, Brown brought up the ongoing feud between the White House and Fox News. Jarrett came back with an answer that echoed many before. “If we see someone distorting the truth, we’re going to call them on the carpet for that,” she said in part.

But it turned out to be a set up by Brown, for the real point she hoped to get at. She stopped Jarrett midway through her answer, following up with:

Brown: So, do you think Fox News is biased.
Jarrett: (laughing) Well of course they’re biased, of course they are.
B: Do you also think that MSNBC is biased?
J: Well, you know what, this is the thing, actually I don’t want to just generalize that all Fox is biased or another station is biased, I think what we want to do is look at it on a case by case basis.

If that’s what the White House wants to do, it’s not what they’re doing at this point. The ongoing feud has been very directly aimed at what they perceive to be a singular political enemy when it comes to TV news – Fox News Channel. Then again, if correcting the record means making them look worse, you probably aren’t going to see a White House blog post headed for publication.

But it’s interesting to see Brown, and CNN, put the White House on their heels a bit. This went beyond when Jake Tapper pressed White House Press Secretary Robert Gibbs on the issue. And from Brown’s perspective, this plays into the whole point CNN wants to drive home: we’re not biased or opinion journalism, our cable news competitors are. On a personal level, Brown is married to Dan Senor, who at one time was a Republican strategist and Fox News analyst (read his new book excerpt on Mediaite here). But the implication here was less a direct defense of Fox, and more a comparison of two outlets spanning the political spectrum.

Could there come a time when Campbell Brown helps her ratings by calling out bias on both Fox News and MSNBC? We’ll see where it goes next.

Here’s the Fox part of the interview: