Can Rush Limbaugh Deliver Pizza? Debating The Power Of Talkers 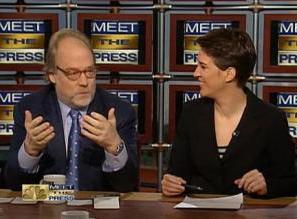 Everyone seems to be talking about Glenn Beck these days (including us), but how powerful is he really?

The power of Beck, Rush Limbaugh and others radio hosts was debated today on Meet the Press, in a conversation that also involved some shots at cable news as a whole.

Republican strategist Mike Murphy doesn’t think the talkers have nearly as much power as others have speculated. “The noisiest parts of the conservative media machine have far less influence than the mainstream media machine that covers the Republican world thinks they do,” he said. “These radio guys can’t deliver a pizza let alone a nomination, and you can case study that out in the last election.”

Murphy was referencing the 2008 election, when Sen. John McCain was able to pull off the GOP nomination despite being pretty much the last choice of conservative radio hosts. Still, Beck has yielded real results – with ACORN and Van Jones. He and Limbaugh may not be able to swing an election, but there is still tremendous power in the media.

One thing Murphy said earlier in the exchange drew the ire of Rachel Maddow, also on the panel. “There is kind of a freak show business now of each side which amplifies the shrillest voices,” said Murphy. “We have one party cable networks now, one of each. And what that does is dumb down the debate. Everything is argument by noise, by hot language and by anecdotes, so facts and more complicated debate is pushed out because it’s not loud and colorful enough.”

Maddow cut in, leading to this:

Maddow: Joe Scarborough -which network is he on?
Murphy: He’s on your liberal network.
Maddow: So how is that a one party network?
Murphy: I would take your prime time and Fox prime time and say it is the same dance toward dumbing the debate.

We’ll also have to remember this comment by David Brooks in 2012. He said if Sarah Palin wins the Republican nomination, “I’ll eat this cup on the air.”

(And a quick side note: one area that MSNBC is dominating Fox News and CNN? Embeddable videos. msnbc.com has by far the best embeddable video features of any news network site. This 10 minute embeddable video is able to be cut within the system, and trimmed to just the point you want. It’s a tremendously helpful tool and means bloggers will not automatically turn to YouTube for clips from NBCU shows – they can do it through msnbc.com even better. Hulu also has this feature.)

Here’s part of the MTP roundtable: