Can We Dispel With the Fiction That Joe Scarborough Is Neutral? 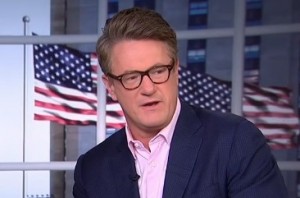 One of the most hotly-anticipated parts of Morning Joe is the “Must-Read Op-Eds” segment, if for no other reason than that in Washington, DC, they won’t even serve you at Starbucks unless you can prove you’ve read them. Every morning, the caffeinated crew goes over a carefully-curated selection of opinion pieces on the day’s hot political topics, and Monday was no exception. One of the meritorious essays stood out in particular:

Wow, how’d that guy make it into the “Must-Read Op-Eds?” What a coup for him!

As we’ve documented in these pages, Joe Scarborough has a Trump-sized stiffie for Marco Rubio, so it should come as no surprise that he’d write a piece called “Marco Rubio gets massacred,” or that he would echo Donald Trump‘s call for Rubio to drop out of the race. His best argument for this is that Rubio risks a career-ending embarrassment if Trump humiliates him in his home state on March 15:

The senator still has time to salvage a political career damaged by his lackluster presidential campaign. But that won’t still be the case if Rubio hangs around this race long enough to be embarrassed by Donald Trump in his home state of Florida. If that were to be the case, the once promising senator would be forced to live out his professional life as a Beltway lobbyist or worse yet, endure the grim existence of being a cable news host.

There are just two problems with that, the first and most significant being that I wrote the same thing yesterday. If your job is conservative commentator (or really, conservative anything) and you find yourself in agreement with Tommy Christopher, it’s time to examine your life, go see Rush Limbaugh, and confess your sins. I’m openly rooting for Donald Trump to win because he confirms everything I’ve always said about Republicans, but even I have enough perspective to leave Rubio’s decision to drop out as a judgment call.

The second problem is that neither Joe nor I (because I’m rooting for Trump) told you about the huge red flag for Trump in the Super Saturday results. Not only did Ted Cruz do better than expected, Trump had a disturbing night in Kentucky, where he began with a huge 15-point lead due to early voting, but wound up with a measly 4-point win due to voters who had seen his debate meltdown.

That could be a temporary setback, or it could mean that Trump is in a rapidly decaying orbit, making it possible for Rubio to close the huge polling gap in Florida. A Rubio drop-out only helps Donald Trump, and getting him to do it now will be easier than if he waits a few days to see some more polling. Even if Rubio doesn’t catch Trump, his political career can survive a 5-point loss better than a 20-pointer. Ted Cruz, on the other hand, has zero chance of catching Trump in Florida. Of course, the hedge bet for Rubio is to drop out now and announce a co-ticket with Cruz that might win Florida, but would definitely spare Rubio the humiliation of a defeat.

Whatever you think of Scarborough’s analysis and/or Rubio’s situation, though, this charade of neutral political analysis by Scarborough is sapping what credibility the show has, which is, by Beltway standards, considerable. Scarborough can write what he wants in his free time, and even say what he wants to on his show, but selling ax-grinding as analysis is just weak.