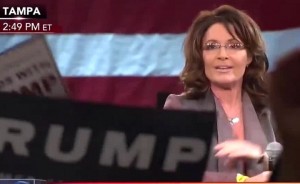 On a day when many media outlets reported that Sarah Palin was cancelling a campaign event because her husband Todd was badly injured in a snowmobile accident, Fox News suddenly cut to a live event in Tampa, Florida featuring the former Alaska Governor. Gretchen Carlson tried to get clarification that the live feed was in fact happening, since reports indicated that Palin was leaving Florida immediately to return to Alaska to be with her husband and family.

And not only did Palin take to the stage to stump for the real estate mogul, she REALLY took to the stage, at times shouting with incredible volume about what she referred to as “petty punk-ass thuggery stuff.” No, seriously:

In the bizarrely rambling and shouting speech that aired on Fox just moments ago, Palin continued:

…and what we don’t have time for is all that petty punk-ass little thuggery stuff that’s been going on with those quote-unquote protesters who are doing nothing but wasting your time and trying to take away your first amendment rights, your rights to assemble peacefully. And the media being on the thugs’ side — what the heck are you guys thinking, media? It doesn’t make sense! Well, you all get it. I think the media and too many other candidates are underestimating the wisdom of the people. You’re smart, energized. optimistic, positive and that’s why you’re here today and I thank you for spending your time here today, because it is time, we have all recognized the majority of americans have recognized Republicans, Independents, good old blue dog Reagan Democrats out there — we have all recognized, we need a revolution. It is time to get rid of the status quo. The status quo has to go, right? We have needed a revolution, and we found our revolutionary. Donald Trump is that revolutionary!

At one remarkable point during Palin’s remarks which you can watch below via NewsNow, she addressed her husband Todd’s conditions, identifying that he is in the ICU recovering and thanking the crowd for their prayers. “My husband was out snowmachining… [he had] a little wreck on a snowmachine,” she told the crowd, then corrected herself in a weird about-face: “A big wreck.”

Incredibly, the former Governor said that the accident “puts things in perspective,” and is forcing her to focus on things that are “worthy”, for instance — and this is true — “to get Donald J. Trump elected President!” The Tampa crowd roared with support.

Watch the truly amazing videos of Palin’s stump speech above from Fox News and NewsNow.