Candy Crowley To Rep. Cummings: Does Obama’s Race Make You More Concerned About His Security Than Bush?
video

Candy Crowley To Rep. Cummings: Does Obama’s Race Make You More Concerned About His Security Than Bush? 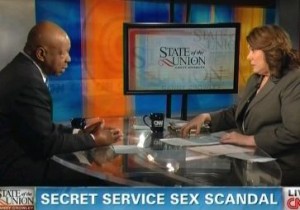 Congressman Elijah Cummings, who serves on the House Oversight Committee, came on CNN’s State of the Union early today to talk about what steps are being taken to further probe into the Secret Service prostitute scandal. Candy Crowley brought up the issue of who would be held accountable for the scandal, before asking Cummings if President Obama‘s race has made him more concerned over presidential security than previous presidents.

Crowley observed that normally speaking, you would want to make sure Secret Service agents don’t get drunk and pick up prostitutes a day or two before they’re supposed to be guarding the president. Cummings made sure to clarify that he thinks there were just a few “bad eggs” the Secret Service and that people shouldn’t judge the agency by its “weakest link.” He said that while Congress should take action to discipline anyone who was involved, no one can legislate that people should not act “stupid.”

Crowley asked if the director of the Secret Service will be targeted by the Oversight Committee or anyone else looking into the scandal. Cummings actually praised director Mark Sullivan for acting quickly as soon as he heard what had happened, and said that many on Capitol Hill believe he did “a good job” in reacting to the scandal.

Crowley ended by asking Cummings a surprising question about President Obama’s security, and his concerns over how different it is compared to other presidents.

Cummings made it clear that he is always concerned about the security of the president, before acknowledging that many African-Americans have expressed “worry” about Obama’s security and the violent rhetoric used about the president.