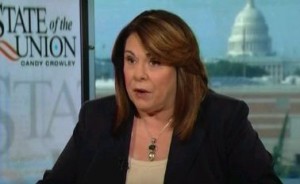 White House Chief of Staff Jack Lew was all over the Sunday shows today to discuss the Obama administration’s reaction to the Supreme Court ruling on health care, but on CNN’s State of the Union, Candy Crowley grilled Lew on the Fast & Furious scandal, the House finding Attorney General Eric Holder in contempt, and President Obama‘s apparent hypocrisy on the issue of executive privilege.

Crowley brought up how Obama invoked executive privilege to avoid handing over information related to the House’s investigation into Holder, and contrasted it with a clip of the president back in 2007 criticizing George W. Bush for “trying to hide behind executive privilege.” She asked Lew why the Obama administration was okay with invoking it in Holder’s case.

Lew said that Operation Fast & Furious began under President Bush (technically, it was a similar plan called Operation Wide Receiver), and insisted that when Holder found out about it, he said it was wrong and stopped it. Lew explained that all the relevant information has been handed over to the House Oversight Committee, but said that thus far, they’ve been using “their investigatory powers in a political way.”