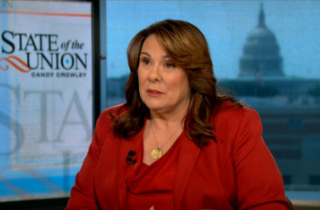 Speaking with POLITICO this afternoon, CNN’s State of the Union anchor Candy Crowley said that her network’s decision to run a documentary series on the life of former Secretary of State Hillary Clinton will undoubtedly make “life more difficult” for her and her hard-news colleagues.

Republican National Committee chairman Reince Priebus has been vocal in criticizing CNN and NBC for their respective films about the potential 2016 Democratic presidential candidate, threatening to pull the GOP out of their televised debates for fear of an inherent political bias against the party.

Speaking with POLITICO’s Patrick Gavin, Crowley confessed that the CNN plans “make life more difficult” for her as a news anchor. “I think there’s no doubt about it,” she said:

“You can say all you want, this is a commissioned documentary from people who are not in the employ of CNN. It’s not me. It’s not Wolf Blitzer. It’s not John King. It’s an outside documentary group. But we’re with CNN and so this is not a story where the nuances are well-received, particularly by Republicans.”

Despite her admission that the documentary will prove difficult for her own job, Crowley disagreed with Priebus’ assertion that the network will have tainted coverage of the 2016 Republican primaries. She then told POLITICO that his demands are likely “political” in nature, because:

“Let’s remember how much they hated the last primary season debates, like more than 20 of them. And their real feeling was that Mitt Romney, who came out the winner of a pretty bruising season and a lot of bruising debates, which were then taken and put into Democratic commercials for President Obama, that they took a look and said, ‘We’ve got to stop these really divisive primaries. We can’t have this many debates.’ And I think this is the beginning of that.”

Watch the interview below, via POLITICO: