Candy Crowley Goes Off On McCain: If Sequester So Bad, Why Is Congress On Recess And Obama Golfing? 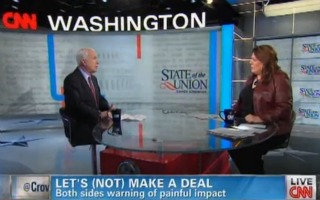 Sen. John McCain (R-AZ) joined CNN anchor Candy Crowley on Sunday morning where he was asked about the ongoing Congressional fight over the mandatory cuts in the sequester slated to take effect next week. Crowley admonished McCain, Congress and the president for a seeming lack of urgency about the need to avoid the coming sequester cuts. All, she says, are saying that these cuts are unacceptable, but at the same time “Congress goes on recess and the president [Barack Obama] goes golfing.”

“Everyone thinks bad things are going to happen when these forced cuts go into effect,” Crowley began. “If it is this dire – and everyone agrees it is this dire – what happens? Congress goes on recess and the president goes golfing.”

Crowley asked why there is not much more urgency among lawmakers about the need to avoid the sequester.

“I won’t put all the blame on the President of the United States, but the president leads,” McCain said. “The president should be calling us over somewhere – Camp David, the White House – somewhere.”

He added that the military has been the subject of too many budget cuts recently, and that is disproportional given the lack of impact that defense spending has on the debt.

“Shouldn’t somebody somewhere be in a bundling somewhere trying got figure this out?” Crowley asked.

McCain said that his Republican colleagues in the Senate have been focused on attempting to avert the sequester for a year to no avail. He also warned the GOP in Congress against giving the president flexibility in how these cuts are implemented.