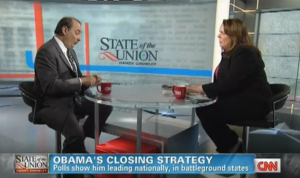 On this week’s State of the Union, Candy Crowley sat down with David Axelrod, senior adviser to the president. Pressing Axelrod for specifics, Crowley grilled him on what the president plans to do if re-elected. How will he reach his goals? He will, Axelrod said, vaguely citing the president’s specifics.

“We’ve come a long way from when we were losing 800,000 jobs a month,” Axelrod said. The goal is not just to fix the economy, but also to create a thriving middle class, he added.

Crowley interjected, asking what the plan is to get there. Axelrod cited vague, favorable-sounding ideas like “responsibly dealing with the deficit while leaving money to invest,” focusing on education, research and development, and clean energy.

“Those aren’t sort of specific proposals,” Crowley pointed out. Axelrod mentioned proposals regarding education and manufacturing, which, he said, will pass. “But they haven’t passed,” Crowley replied.

Axelrod then took a different approach, seeking to remind Crowley that the other side’s proposals include massive tax cuts that “skew” to the wealthy, and slash funding for education and research.

Crowley noted that she’s not suggesting who to support, again circling back to her central question: Is there a new plan? Or is the plan to stay the course?

“The president has a series of specific proposals,” Axelrod said, without volunteering any of those specifics. “We need a long-term plan, Candy. Not taglines for a show like this, 30 days before the election.”