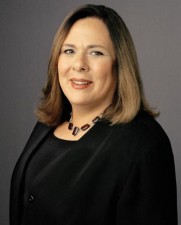 CNN senior political correspondent Candy Crowley, currently the #65 TV Reporter on the Mediaite Power Grid, has just been named the new anchor of CNN’s Sunday morning program State of the Union. Crowley will take over beginning next Sunday, February 7th, replacing John King, who launched State of the Union just over a year ago. King will move to host the the weekday CNN program at 7 p.m.

CNN’s new Sunday lineup will feature State of the Union in a new one hour block (instead of its original 4 hours) at 9 a.m., followed by Fareed Zakaria GPS at 10 a.m. and Reliable Sources at 11 a.m.

Below is the full announcement from CNN:

Senior political correspondent Candy Crowley has been named anchor of CNN’s Sunday morning political program, State of the Union, it was announced today by Jonathan Klein, president, CNN/U.S. Crowley will take the reins of the program beginning Sunday, Feb. 7 from 9 a.m. to 10 a.m. (ET). The program will continue the tradition of hosting a political hour of newsmaker interviews along with analysis of the week’s most important issues.

“Candy’s rare combination of shrewd insight and healthy irreverence for the games politicians play has made her one of the most honored political journalists and a cult figure among CNN viewers,” said Klein. “Every Sunday she’ll translate Washington-speak into plain English that every American can understand, as she has been doing better than any reporter on the beat for decades.”

“To me, Sunday morning is a sweet spot—a weekly meeting place to bring the hopes, worries and questions of everyday Americans I talk with along the campaign trail to the people I talk with in the Corridors of Power,” says Crowley. “Add to those conversations, interviews with A-team experts and international heavyweights making sense of global issues and what you have is interesting, relevant information. I can’t wait.”

An award-winning political journalist, Crowley joins the ranks of the network’s all-star Sunday lineup that includes Christiane Amanpour and Fareed Zakaria. The new Sunday lineup will begin with State of the Union at 9 a.m., followed by Fareed Zakaria GPS at 10 a.m. and Reliable Sources at 11 a.m. An updated edition of State of the Union will air at noon followed by a replay of GPS at 1 p.m. CNN’s Amanpour will air at 2 p.m. and replay at 5 p.m.

State of the Union launched one year ago with CNN’s chief national correspondent John King at the helm, and quickly became the most-quoted of the Sunday morning talk shows. In the wake of that success, it was recently announced that King would take over the weekday 7 p.m. program, which will launch in February.
Since joining CNN in 1987, Crowley’s assignments have taken her to all 50 states and around the world. She most recently served as the network’s senior political correspondent covering a broad range of stories, including presidential, congressional and gubernatorial races and major legislative developments on Capitol Hill.

As a member of the Peabody Award-winning “Best Political Team on Television,” she played a pivotal role in CNN’s America Votes 2008 coverage, traveling to both conventions, every debate and additional stops along the campaign trail. Crowley earned a prestigious Gracie Allen Award in 2009 for her coverage of Hillary Clinton’s bid for the White House. She also was part of the network’s Emmy Award-winning 2006 mid-term election coverage.

In her career, Crowley has covered the presidential campaigns of Pat Buchanan, George H.W. Bush, George W. Bush, Bill Clinton, Howard Dean, Bob Dole, Jesse Jackson, Edward Kennedy, John Kerry, Barack Obama and Ronald Reagan, among others. Since the presidential nomination of Jimmy Carter, she has covered all but one of the national political conventions.

CNN Worldwide, a division of Turner Broadcasting System, Inc., a Time Warner Company, is the most trusted source for news and information. Its reach extends to nine cable and satellite television networks; one private place-based network; two radio networks; wireless devices around the world; CNN Digital Network, the No. 1 network of news Web sites in the United States; CNN Newsource, the world’s most extensively syndicated news service; and strategic international partnerships within both television and the digital media.