Candy Crowley To DNC’s Wasserman Schultz: If Obama Is Doing So Well, Why Are The Polls So Close?

Candy Crowley To DNC’s Wasserman Schultz: If Obama Is Doing So Well, Why Are The Polls So Close? 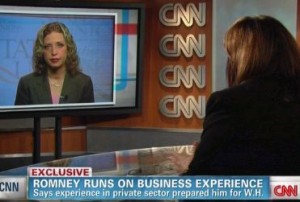 DNC Chairwoman Debbie Wasserman-Schultz appeared on CNN’s State of the Union today to tout President Obama‘s economic record and make the case for his reelection. Host Candy Crowley brought up recent polls showing Obama dead-even with Mitt Romney on the economy, and asked Wasserman-Schultz if Obama is doing so well with the economy and job creation, why isn’t he well ahead of Romney in the polls?

47 percent of those surveyed said Romney would do a better job handling the economy as opposed to 46 percent for Obama, while Obama only gets a three percent advantage over Romney on the question of who would be better for job creation. Crowley used these numbers to ask Wasserman-Schultz exactly what advantage Democrats think they have in this year’s elections.

Wasserman-Schultz said this election was always expected to be a close one, and argued that despite all the progress that’s been made, the president himself is still dissatisfied that not enough progress has been made. Crowley suggested the polls indicate people don’t think the past four years have been much of a success. Wasserman-Schultz insisted that Americans are generally divided pretty evenly during election years, but made sure to contrast Obama’s looking forward with Romney being someone who “wants to take us back to the policies that got us into the worst economic crisis in the first place.”

Crowley brought up another recent poll in Florida, Wasserman-Schultz’s home state, that Romney leads Obama in the key state by a six-percent margin. Wasserman-Schultz dismissed the poll as a “snapshot” and said there have been polls showing Obama ahead of Romney and others showing them dead even.