Candy Crowley to Scott Walker: If GOP Opposes Benefits, Why Would Unemployed ‘Become a Republican?’ 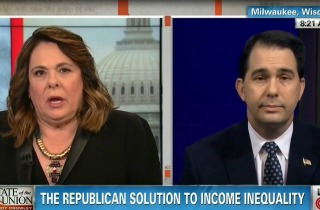 CNN anchor Candy Crowley sat down for a lengthy interview with Wisconsin’s Republican Gov. Scott Walker on Sunday morning’s State of the Union on CNN. There, she asked Walker about the Republican Party’s opposition to an extension of long-term unemployment benefits without a spending offset and an increase in the federal minimum wage. She asked how the GOP expects to expand its ranks given its opposition to these and other programs that are enjoyed primarily by low-income Americans.

Crowley asked Walker about the GOP’s positions on both minimum wage and unemployment benefits. Taking on the persona of an American who takes advantage of these programs, Crowley asked, “Why would I become a Republican?”

“How do you message that in any way to reach out to those who are disinclined to sign up for the Republican Party?” she asked.

“Because, in the end, what people want is freedom and opportunity,” Walker replied. “You don’t get that through the mighty hand of the government.”

“That’s not an uncommon argument for many Republicans,” Crowley followed up. “What makes this expand the Republican Party which desperately needs to bring in something other than what’s really been a shirking base in your party? How do you re-sell that message?”

Walker replied that the reforms he has supported in his state have resulted in people going back to work which is true freedom, and that message is what will resonate with the voting public.