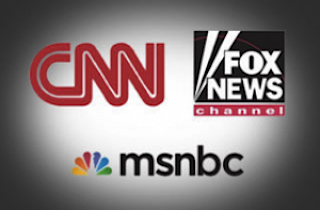 MSNBC’s Chris Hayes attacks CNN and Fox for their coverage of the missing Malaysian airliner.

MSNBC’s Chuck Todd does the same.

A CNN producer named Vaughn Sterling fires back at Todd.

Almost every evening, Fox’s Bill O’Reilly ridicules plane coverage on CNN, which isn’t very different than what can be seen during the three other primetime shows (Greta Van Susteren, Megyn Kelly, Sean Hannity) on his own network.

But Greta—formerly of CNN and currently with Fox—has no problem with it, telling “critics” (without naming names) to “get over it.”

OK, you get the idea.

Cable news taunting is nothing new, having been perfected (for lack of a better word) by former MSNBCer Keith Olbermann. Night after night, his Fox News competitor at 8:00 PM, the aforementioned O’Reilly, was his primary target during his dubious “Worst Persons” segment. Much to Keith’s chagrin, O’Reilly didn’t return the favor by making it a rule to never utter Olbermann’s name. The theory here is O’Reilly wanted to avoid punching down, and given The Factor’s ratings superiority over KO’s Countdown it was a wise course of action. Instead, O’Reilly would periodically hammer “NBC News” or “General Electric” (then NBC’s parent company) to broadly paint the entire organization with one brush, only because he knew the more distinguished and reputable NBC Mothership wanted little association with its rogue cable news relative.

So when Olbermann was shown the door at 30 Rock back in 2011, some thought the attacks would cease. But KO helped make the TV careers of Rachel Maddow and Lawrence O’Donnell—recommending that both have their own programs to impressionable MSNBC President Phil Griffin. From there, Maddow—the story goes–took Olbermann’s mantle as player-manager and pushed Griffin to give Chris Hayes a primetime spot as well. And on cue, all three have continued the Olbermann tradition of going after the competition (Fox and increasingly CNN) since.

But hearing Hayes call out CNN this week for overdoing it on any story is the best unintentional comedy out there right now. Despite being seemingly lucid at age 35, Hayes’ short-term memory appears to be fleeting. Why else would someone who went all-in (pun intended) on the Chris Christie story from January 8th to February 4th take exception to any news outlet covering a story too much? According to transcripts for Hayes’ show, Christie was the lead on every program for nearly one month. Yet…the host still attempts to take the high road of journalism while clearly speeding down Hypocrisy Highway.

Mr. Hayes also takes issue with the use of breaking news banners as it relates to CNN’s coverage. But back on those cold winter nights during the height of Bridgegate, the Brown University grad had no issue starting most broadcasts out with some variation of “Breaking news out of New Jersey tonight…” even though the whole “breaking” part of the story had already been reported on his network the previous anywhere from three to eight hours prior.

And Chuck Todd? Well, the day after pointing the finger at CNN for, yup, unlawful use of breaking news banners, the host of The Daily Rundown saw his show use a breaking news banner for MH370 even though—in the true sense of the term—there was nothing breaking at that time. And as CNN Producer Vaughn Sterling pointed out—thanks to the anybody-can-jump-into-the-war-of-words ability Twitter provides—Todd’s complaint came as MSNBC was featuring a (ding!) BREAKING NEWS banner around the missing plane. 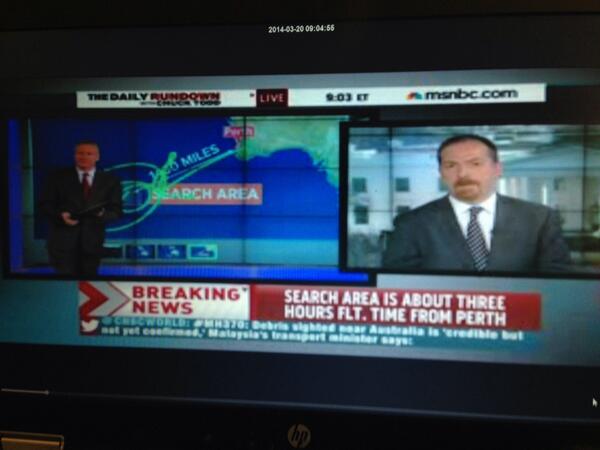 Bottom line: Breaking news banners were being abused by Fox, CNN and MSNBC long before MH370 went missing. It’s actually more the exception than the rule for any cable news broadcast not to lead each hour with a breaking news or alert banner, even if invariably its use isn’t remotely warranted. But most viewers are smarter than those who work inside the media bubble think, and therefore have been mentally trained to ignore all the perpetual swooshes and red alerts.

Meanwhile over at Fox, O’Reilly has kept plane coverage to a relative minimum, dedicating only 1-2 blocks (out of six) to the story (with the second block on periodic nights used to primarily mock the attention the story was receiving). An hour earlier on the Fox schedule, Greta Van Susteren (along with Megyn Kelly and Sean Hannity at 9 and 10 PM) has gone much heavier on plane coverage and has defended the decision to do so (albeit on her blog, Gretawire). But Greta’s philosophy is not surprising considering her career was launched primarily due to blanket coverage of O.J. trial when she was with CNN as a legal analyst in the early/mid 90s.

Oh, you think wall-to-wall on one story for weeks is something new? It’s been around for at least two decades, starting that night in Brentwood in June of 1994. For better or worse, 24/7 reporting of the Simpson circus blurred the lines between hard news and sensationalism forever.

Back to the future, the barbs are traded among the three cable networks more than ever, especially as Twitter users at the networks have no pesky executive producers or copy editors to deal with, allowing the likes of Chuck Todd or Sally Kohn to bypass approvals to attack whomever, whatever, whenever.

Moving forward, the wholesale coverage of stories like Flight MH370 would have been a much harder strategy for CNN to pull off 20 years ago. Remember, 1994 was a year when the internet didn’t really exist for regular folks at home. There was no Fox, no MSNBC. In other words, multiple platforms didn’t exist for those suffering from plane fatigue looking for other news to absorb.

However, in 2014, if you’re just soooo over the plane stuff and want something, anything else in terms of news, it’s all there right in your phone, pad, PC or Mac. “Other” news in varying degrees can also be found (sometimes) on Fox, MSNBC and AJAM (Al-Jazeera America). Broadcast options that weren’t available 20 years ago obviously are now, thereby allowing a network like CNN to go wall-to-wall on stories like (as illustrated last year) the Boston Bombings, Oklahoma tornadoes and Zimmerman trial.

Every time CNN goes this route, it gets flak from its competitors. But numbers are numbers, and the all-in strategy is hard to argue against when looking at the substantial ratings boost (crushing MSNBC and beating or running even with Fox in most timeslots) the network has enjoyed during these instances (along with the current boom around the plane coverage). The big test for the network now is holding on to viewers who have been stopping in the past 17 days.

The 777 story—believe it or not—will eventually go away. And when it does, slow news cycles end up depending heavily on compelling on-air talent (the kind that make a viewer care about a story they otherwise wouldn’t), and producers offering up gripping, unique content. Fox’s numbers–no matter what the circumstance–illustrate it has built a loyal audience that sticks around regardless of what’s hot and not. The jury is still out on whether CNN and MSNBC currently possess that ability.

Anchors…hosts…personalities…most can’t contain their appetites when it comes to eating their own.

Living in arguably the most competitive, most ego-driven, most cutthroat industry in the country can lead to such behavior.

And with the ability to throw Twitter punches from afar, combined with having over 100 hours of fresh content to fill on a weekly basis…