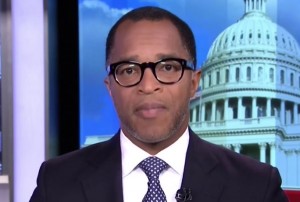 The fallout from former President Bill Clinton‘s impromptu tarmac meeting with Attorney General Loretta Lynch continues unabated, given fresh life by the news that former Secretary of State Hillary Clinton was interviewed by the FBI over the weekend. On Tuesday’s edition of Morning Joe, Washington Post columnist and Hillary Clinton supporter Jonathan Capehart continued the flagellation by calling the meeting a “disaster of epic proportions” while dissecting his various and sundry interviews with AG Lynch on the subject of that meeting.

One, she’s trying to explain how this process works, because she knows that this was and remains a disaster of epic proportions when it comes to the independence and integrity of the Justice Department. She wants everyone to understand how this process is working. Two, in the clip you showed, she talks a great deal about career prosecutors and career investigators, she’s trying to make it clear to everyone, if they are welling to hear it, that she’s not making the decision, political people are not making the decision.

Somebody needs to get Jonathan Capehart a Xanax. Since the news of this meeting broke, many Democrats and Hillary Clinton supporters have expressed measured disapproval of the meeting, which did indeed demonstrate a poor grasp of public relations, mostly by President Clinton. Most objective observers consider it “poor optics,” nothing more. I don’t think even Donald Trump has gone to DefCon “Epic Disaster.”

That’s an awful lot of trouble to go through just to avoid getting yelled at by Mika Brzezinski, but Capehart’s over-the-top reaction raises a similar question to the one he asked AG Lynch this weekend: What was everyone thinking when they decided that Lynch’s first interview following that meeting should be conducted by an openly pro-Hillary columnist? No matter how good the questions or the answers, their impact is blunted by that fact, and now Capehart has to tie himself in knots to protect his credibility, instead of doing what he ought to be doing: holding the “objective media” to account for using the “bad optics” crutch in order to avoid talking about the substance of this story.

That bit of shorthand is an implicit admission that the concerns raised by your Brzezinskis and your Andrea Mitchells are superficial crap, and are, by definition, without substance. If anything, the meeting is substantively a suggestion of innocence, since if they were really engaged in a plot to collude for Hillary, President Clinton and Attorney General Lynch wouldn’t be caught within 50 miles of each other.