Capt. Ron Johnson to Don Lemon: Police in Ferguson Are Getting a ‘Bad Rap’
VIDEO

Capt. Ron Johnson to Don Lemon: Police in Ferguson Are Getting a ‘Bad Rap’ 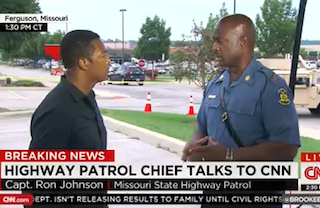 On Tuesday afternoon, CNN’s Don Lemon spoke to Missouri Highway Patrol Captain Ron Johnson in an attempt to find out how things got so bad between protesters and police Monday night in Ferguson. After hearing from Johnson that there were between 50 and 60 arrests in the city, Lemon asked, “What happened last night, Captain?”

“The crowd got agitated and excited again and once again it was the criminal element that was within the crowd,” Johnson said. At a certain point he said glass and plastic bottles were being thrown at the police officers on the street, stressing that the police did not know what the bottles contained. “You’re unprotected because it’s coming from anywhere. You have no idea when it lands on the floor.”

“Do you think the amount of force was appropriate?” Lemon asked. “Because people were watching and saying, ‘Oh my gosh, it looks like Afghanistan or Iraq out here.'” His CNN colleague Jake Tapper notably compared the scene to Bagram Airfield in Afghanistan.

Johnson defended the “militarized” police force there, saying the presence of Molotov cocktails and other weapons in the crowd warranted it. Asked by Lemon if the police in Ferguson are getting a “bad rap” by the media, Johnson said, “They are getting a bad rap” because they are just trying to bring “peace” and “justice” to the city.

Later, Johnson said he is planning to approach Tuesday night expecting “peace” on the streets, with no “predetermined outlook” about what might happen next. To the people who are abiding the law, he said, “We will get through this.” To the “agitators,” he said, “You will not defeat us.”