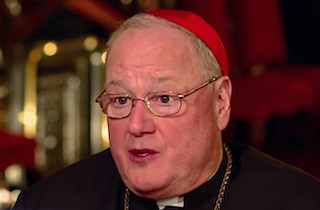 Meet the Press host David Gregory pressed Cardinal Timothy Dolan Sunday morning about several of Pope Francis’ unorthodox positions, especially with regards to gay marriage, including comments the pontiff made this week that suggest he could be open to civil unions.

Dolan denied that Francis had indicated support for civil unions, merely a willingness to engage in dialogue over them.

“If I saw the reports accurately, he didn’t come right out and say he was for them,” Dolan said. “Once again, in an extraordinarily sincere, open, nuanced way, he said, ‘I know that some people in some states have chosen this. We need to think about that and look into it and see the reasons that have driven them.’ It wasn’t as if he came out and approved them. But he just, in the sensitivity that has won the heart of the world, he said rather than quickly condemn them, let’s see if — let’s just ask the questions as to why that is appealing to certain people.”

“It would in a way,” Dolan said. “Marriage, between one man and one woman forever leading to life and love, that’s not something that’s just a religious sacramental concern — you bet it is that, and that’s how god has elevated it to making a sacrament — but it’s also the building block of society and culture. So it belongs to culture. If we water down that sacred meaning of marriage in any way, I worry that not only the church would suffer, I worry that culture and society would.”

Dolan also rejected the claim that conservative Catholics in the U.S. were feeling alienated by Francis’ statements.

“I haven’t sensed too much bristling among the conservatives,” he said. “They honestly will say his style is a little different and might periodically cause us a little angst, but in general they too seem to be rejoiceing in what you might call the evangelical fervor, the good interest in the life of the church. So I haven’t sensed a lot of massive discontent among the conservative Catholics.”