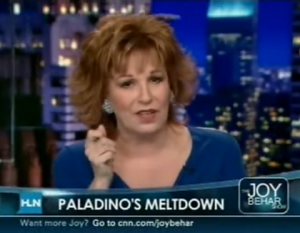 Carl Paladino is not a fan of Joy Behar not being a fan of Carl Paladino. Last week, on The View, Behar joked that NY gubernatorial Tea Party candidate Paladino, who had a child out of wedlock (while he was wedlocked to his wife), could win the election “if all his illegitimate children vote.” Oof, Paladino and his people did not like that one. The response from Paladino campaign manager Michael Caputo:

Joy Behar should be absolutely ashamed of herself for referring to Carl’s daughter as illegitimate. She’s a child and does not deserve that kind of treatment from a woman who should know better. That’s catty, it’s pissy and strikes of something that someone would say when suffering from a sudden hot flash. The only person here who’s illegitimate is Joy Behar’s hairstylist. Joy is off Carl Paladino’s Christmas card list.

BEHAR: Now this other guy, Carl Paladino, what do you know about him? He sent some really racist e-mails ahead. He forwarded these hideous, hideous — I read Bob Herbert today. It’s unbelievable stuff.

What do you think — where do they come up with these people? Go ahead.

MAHER: ‘Of course we’re going to send racist e-mail. As a woman have you ever walked by a construction site? Of course you’re going to be accosted with all sorts of horrible things coming out of the mouths of construction people.’ And his other thing is, ‘Yes — I admit it — bad judgment.’ So here you have a guy running in New York State, which is supposed to be one of the most sophisticated states in the nation saying, “I’m in the construction business and I use bad judgment. Vote for me. These are my qualifications to be the governor of the second largest, most populist state in the country.” It’s just insane.

BEHAR: I mean, you know, I got into a big tiff with him the other day because I said he could if all of his illegitimate children voted for him and I got this really nasty response. This is what &mash from his people. “That’s catty. It’s pissy and strikes of something that someone would say when suffering from a sudden hot flash. Joy is off Carl Paladino’s Christmas card list.”

Can you believe these idiots are actually turning on me, a comedian, for a comment like that?

MAHER: And to play the hot flash card, Joy.

So wrong, indeed. Meanwhile, it seems that exclusion from the Paladino Christmas card list is the go-to punishment for anti-Paladinites — Caputo also warned Paladino-nemesis Fred Dicker of the New York Post that he, too, was off the list. Naughty! Speaking of, Behar also discussed Paladino with actress Linda Blair, who can be pretty scary in her own right, plus wrestler Mick Foley, who may be an awesome humanitarian but whom you probably don’t want to see angry. Oh, and also with Bravo’s Andy Cohen — who can sic some Real Housewives on you, need I say more — and me. I can be very scary, too. RAWR. Our fun segment from Thursday night’s show below.