Carlson Holds Gibbs’ Feet To The Fire: No, ‘It Wasn’t Clear’ That Obama Called Libya Attack A Terrorist Act
Video

Carlson Holds Gibbs’ Feet To The Fire: No, ‘It Wasn’t Clear’ That Obama Called Libya Attack A Terrorist Act 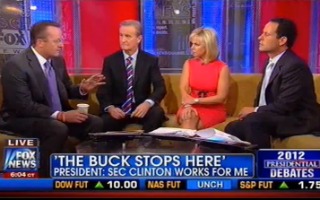 Obama senior campaign adviser Robert Gibbs stopped by Fox & Friends Wednesday morning, where he was asked about the President’s rhetoric regarding the attack in Libya that resulted in the death of Ambassador Chris Stevens, as well as several other innocent Americans and Libyans.

After playing a clip of one audience member asking Obama who, exactly, denied requests for enhanced security in Libya and why, Gretchen Carlson said that “the President didn’t really answer that question, Mr. Gibbs. Do you want to answer it for the American people today?”

Host Brian Kilmeade later asked why individuals with higher security clearance — like, say, chief counterterrorism adviser John Brennan — weren’t out talking about what happened in Libya. Gibbs responded by emphasizing that the information shared with the American public was the most complete available at the time.

“Did you guys high five each other last night,” Carlson asked, “after Candy Crowley came out and said what she said, basically supporting the President, that he did call it an act of terror on the second day after the attack, when in fact the transcript shows he didn’t specifically call Benghazi an act of terror?”

Gibbs disagreed with the premise of the question, saying that Obama did refer to “acts of terror” in the Rose Garden the day after the attack and it was “clear” what he’d meant.

“It wasn’t clear or 12 days after that,” Carlson hit back. “He went on The View… he went on the Univision interview and he continued to say did he not call it a terrorist attack 12 days later.”

Later, Gibbs said we should figure out exactly what happened and how to prevent it from happening again without using the events in Libya as a “political football.”

When asked how much the President knew about security issues in Libya, Gibbs maintained that he does not personally have access to sensitive security briefings and so couldn’t answer the question.