Carly Fiorina: Making Fun Of Opponent’s Hair ‘Sort Of Goes With The Territory’ 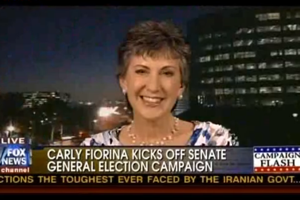 California Senate candidate Carly Fiorina had some explaining to do yesterday after an off-air open mic caught her questioning fellow Republican Meg Whitman‘s decision to go on Hannity and making fun of opponent Sen. Barbara Boxer‘s hair. Tonight she went straight to Greta van Susteren to explain herself: yes, she thinks Sean Hannity is a tough interviewer, and as for the hair issue? “It sort of goes with the territory.”

Her comment that Sean Hannity is “not an easy interview” saved a series of comments along the lines of “you know what he’s like” that could’ve been interpreted pretty negatively, but talking to van Susteren on On the Record last night, she didn’t really change her original statement. In fact, she added she is excited to sit down with Hannity at the end of the week, and fully expects him to give her as hard a time as she suspected he would give Whitman. “He is a tough interview– and that’s his job!”

As for the far meaner comments that her Senate opponent’s hair was “so yesterday,” she was quick to make light of her own, too: “My hair has been talked about by a million people, it sort of goes with the territory… I started out without any hair.”

Van Susteren gave her the rest of the time to talk about her actual campaign, and she reiterated that she was “exceptionally proud of my time as CEO of HP” despite attacks on her tenure, which she attributed to a resistance to change within the company.