Carly Fiorina May Not Win, But Facing the Press Isn’t the Issue It Is for Hillary Clinton 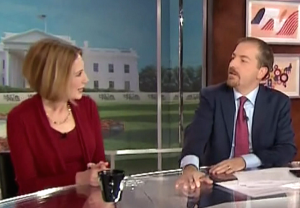 The candidacy of Carly Fiorina is a fascinating one from a media perspective. She’s a former CEO and political candidate…with both of those pursuits ending with her being dismissed.

The easy line of questioning of Ms. Fiorina has become apparent early and often regardless of the many outlets she’s appeared on since announcing her candidacy last week, and it sounds something like this:

If you got fired as CEO of a company, what makes you think you could be president?

If and when Hillary Clinton—the likely Democratic nominee—actually sits down for a major interview in any capacity, it will be interesting if she’s faced with the same scrutiny regarding her performance in her last job as Fiorina has endured. To that end, feel free to answer these questions: What was Mrs. Clinton’s signature achievement as Secretary of State for five years? And if we’re going through the full LinkedIn page…what was her signature achievement as senator? Why was she fired by Democratic voters in 2008 in favor of another candidate who wanted to be CEO of the party…and of the country for that matter?

And before you accuse the writer of deflection, consider the following names:

That list is courtesy of a 2013 Business Insider piece on CEOs who had been fired at some point of their careers. In regards to Ms. Fiorina, she was asked this question again, to which she didn’t run from the answer (or hide, like Mrs. Clinton has been doing) around why she was fired: “It is a leader’s job to challenge the status quo. And when you do, you make enemies,” adding, “I understand executive decision making, which is making a tough call in a tough time, for which you are prepared to be held accountable,” she said. “(This is) something that at least Hillary Clinton doesn’t have a track record of.”

Put aside Republican and Democratic colors for a moment (I know…it’s hard). If you support Mrs. Clinton, isn’t it troubling your candidate isn’t answering any questions? The New York Times reports Hillary has answered seven questions in 28 days from the press. That’s 0.25 questions per day. You want to slam Fiorina’s record at HP? The 30,000 jobs lost? Have at it. But at least she can be asked. Since announcing her candidacy less than a week ago, Fiorina has answered well over 200 questions on the record.

But playing a game of gotcha around getting fired? You might want to look at the list above again and especially Steve Jobs, who was fired from Apple itself before coming back to save the company and making it into one of the greatest—if not the greatest—American success stories of all time. On Meet the Press today, Chuck Todd asked Fiorina why HP stock went up seven percent after she was asked to leave. Well, guess what? Apple stock went up after Jobs was fired as well. As for the rest of those names above from Bloomberg to Blank to Iacocca, they’ve all been fired at some point of their careers, too.

Does this mean Fiorina can win the nomination? No. But it would be pure entertainment—and perhaps good strategy—to watch her as a VP candidate for whomever eventually survives the GOP primary to win the nomination. If a running mate is supposed to be a pit bull who gets their hands dirty (See: Joe Biden’s bare-knuckled debate performance against Paul Ryan), Fiorina has already proven to be someone to at least consider.

Carly Fiorina sat down with everyone from Chuck Todd to Katie Couric to Seth Myers this week. She was more ubiquitous than Sofia Vergara.

She may not win, but it won’t be from a lack of running from her record, from facing the media regardless of network or platform.

Something the Democratic frontrunner has no inclination to entertain.