Carly Fiorina Nails It: It’s Democrats, Not Republicans, That Most Americans See As ‘Extreme’
video

Carly Fiorina Nails It: It’s Democrats, Not Republicans, That Most Americans See As ‘Extreme’ 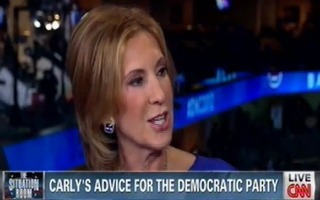 On Thursday, former Republican Senate candidate from California, Carly Fiorina, dropped an impressive bit of counterintuitive political wisdom on her fellow panel guests during CNN’s increasingly interesting, unscripted “unsolicited advice” segment with Pete Dominick. Fiorina performed a clever bit of reverse logic on Democrats and identified, succinctly and dispassionately, the many reasons why the Democratic National Convention has handed Republicans a litany of ways in which they can tar Democrats as the party of real extremism for America’s center-right electorate.

Fiorina set up the road-worn Democratic attack on Republicans as “extreme” – a charge born in the pages of the New York Times within hours of the birth of the tea party in April 2009, and clung to ever since by Democratic party operatives as tightly as one would imagine residents of Western Pennsylvania cling to scripture and firearms.

Since nearly the minute President Barack Obama was inaugurated, Democrats have charged that Republicans’ views are outside what they imagine to be the values shared by most Americans. To reinforce this view, they see empirical evidence that contradicts this notion as inexplicable aberrations — like, say, the largest electoral drubbing the Democratic party has been handed by a midterm electorate since 1938.

Fiorina was not one of the lucky ones in 2010, narrowly (for California) losing her Senate race to multi-term Sen. Barbara Boxer. But the clever former Hewlett-Packard CEO has wisdom to share with her party. She showed that political acumen in today’s “unsolicited advice” segment, when she detailed the many ways in which the Democratic party has shown itself to be utterly insular and dedicated to excluding all but the most reinforcing views about where Americans really stand on the issues.

“I’ve been shocked at the last two nights,” Fiorina began. “We’ve had audiences here booing when God was put back into the party platform.” Why would the electorate respond poorly to yesterday’s embarrassing episode? According to a Pew survey from 2007 of 35,000 adults, only 16 percent of Americans described themselves as unaffiliated with any church, and just 4 percent of those respondents were atheists or agnostics. Americans are, by and large, friendly to religion if not religious themselves.

“We have people who are clearly anti-free trade — something that Clinton was always very pro,” Fiorina continued. Mitt Romney has his own troubles on trade, adopting some troubling anti-Chinese rhetoric while on the trail during the GOP primary process. However, as a seasoned businessman who dealt with China while their rising steel industry quickly drove the globe out of the steel business in the 1990s, it’s fair to say that he understands the consequences of a trade war with China.

Americans in general do not have a sour view of free trade across borders. In 2009, 66 percent of Americans supported free trade. That number slipped a bit in 2010 as the persistent  recession turned into a sluggish recovery. A Pew poll from November 2010 showed a plurality of Americans had become suspicious of free trade. However, when broken down nation by nation, the only country Americans would be even slightly wary of entering into free trade agreements with was protectionist China – and then, only by a margin of 46/45 percent.

“This is a party that has become — not just pro-choice, which I respect — but pro-abortion,” Fiorina continued. “Any abortion, anytime, anywhere, for any reason, at taxpayer funding. Sandra Fluke, a very wonderful and smart young woman, she’s talking about not just insurance programs covering contraception — I can support that. She’s talking about contraception that’s free for every woman. That is, at taxpayer funding.”

When it comes to taxpayer funding for contraception and mandating that religious employers provide birth control in the benefits they offer their employees, a March poll found that a solid majority of Americans oppose this edict. By 51/40 percent, Americans thought all employers should be allowed to opt out of a contraceptive mandate. By 57/36 percent, Americans thought religious employers should absolutely be excused from such a heavy-handed mandate.

“This is a party that didn’t say one thing about $16 trillion worth of debt,” Fiorina concluded. Next to jobs, poll after poll registers the nation’s spiraling debt as Americans’ next greatest concern. One party owns this issue. The Democrats have not even offered a solution to the debt, save the laughable and frivolous campaign platform of raising taxes on 2 percent of the population by 4 points.

Fiorina is dead on — it is the Republicans, not Democrats, who have their finger on the pulse of what Americans are truly concerned about. And she has hit the nail square on the head that it is Democrats that are “extreme,” not the GOP. The endless hectoring by members of the coastal media has intimidated the GOP into thinking that they are a minority party. It’s time for the Republican National Committee and its allies to wake up and do some messaging. It’s also time that Carly Fiorina start a consulting firm.

Watch Fiorina’s advice below via CNN: