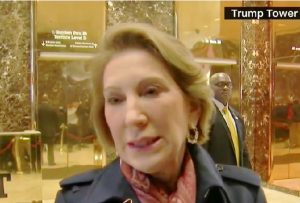 One-time presidential candidate Carly Fiorina met with President-elect Donald Trump today at Trump Tower. Fiorina, who was a vocal Trump critic during the GOP primary, is now being rumored to be part of Trump’s administration. It has been reported that Trump is looking at the former Hewlett-Packard CEO to be the director of national intelligence.

Following her meeting with the incoming POTUS, Fiorina spoke with reporters in the lobby. In the discussion, she brought up the topic of the day, hacking, while also mentioning China.

“We spent a fair amount of time talking about China as probably our most important adversary and rising adversary,” she stated. This, of course, comes on the heels of Trump’s phone call to Taiwan that seemed to violate the United States’ recognition of the ‘One China’ policy.

She also mentioned hacking and contrasted China and Russia.

One may find it curious that Fiorina used the term “purported” in relation to Russian hacking but not with Chinese hacking. The biggest news story right now revolves around the CIA concluding Russia actively interfered in the election to assist Trump.

UPDATE 3:00 PM ET: Last year, Trump had this to say about listening to Fiorina speak:

I just realized that if you listen to Carly Fiorina for more than ten minutes straight, you develop a massive headache. She has zero chance!