Carney and Jonathan Karl Square Off Again: ‘That’s a Very Long Answer to a Short Question’ 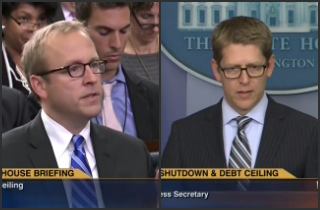 “Is the president willing to engage in budget negotiations with the Republicans if the government is still shut down?” Karl asked.

“I think the president has been very clear on that. If the Republicans think — or the Tea Party that is driving Republican decision-making — thinks they can extract concessions by punishing the American people, by punishing the American economy in order to get what they want, the answer is no. The president is meeting with House Republicans today. […] But they will not, whether it’s Obamacare or tax breaks for millionaires or any other of their possible demands, they’re not going to get it in exchange for funding the government in a CR that was set by Republicans. Remember, the whole point of a short-term CR, as proposed by the speaker, originally, was to allow for time to have budget negotiations. so what’s the rationale for refusing to do that in order to have budget negotiaitons? There is none. It’s spite. It’s deliberate harm to average folks out there, some of them whom are directly affected because they can’t go to work, others who are affected because they can’t get a small business loan or they can’t get access to services that are important to them. There is macroeconomic harm done the longer the government is shut down, and there is no logical rationale for it. And I would say they’re doing harm to the American people, they’re doing harm to the American economy. And by all accounts they’re doing harm to the Republican Party. Which is bad for America. We need two strong parties that can work together and not be in a situation where one faction of one house of one branch of government is forcing shutdowns or default.”

To which Karl replied with just a slight hint of feistiness: “That was a very long answer to a short question. I just want to be sure I got it right. The president will not engage in budget negotiations with the Republicans until the government is reopened. Is that his position?”

“Because the Republicans have proposed this 6-week extension to give time for these budget negotiations they think will happen while the government is shut down,” Karl pushed back on the press secretary.

Watch the full exchange below, via C-SPAN3: