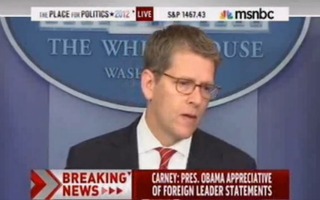 On Friday, White House Press Secretary Jay Carney weighed in on the ongoing protests spreading across the Muslim world that ignited on 9/11/12. Those protests resulted in the breaching of the U.S. embassy in Cairo and the assassination of the U.S. ambassador to Libya. Carney said that those protests were aimed exclusively at an offensive, anti-Muslim video and not at the United States or the administration of President Barack Obama.

Carney made it clear that the protests across the Muslim world targeting U.S. embassies and consulates, is in no way directed at the policies of President Obama’s administration.

Carney said that the protests were exclusively aimed at a video which is highly critical of Islam that a U.S.-based filmmaker put online in June:

Carney made it clear saying twice that, though the video is in poor taste in the estimation of the White House, it in no way justifies violence.

Watch the press conference via MSNBC: