Carney Insists U.S. Did Not Negotiate with Terrorists: Bergdahl ‘Was Not a Hostage’ 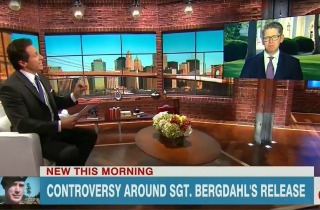 On Monday, outgoing White House Press Sec. Jay Carney joined CNN’s Chris Cuomo to discuss the release of Army Sgt. Bowe Bergdahl, an American soldier who was released this weekend after being held for five years by the Taliban. When asked if the United States had “negotiated with terrorists” for Bergdahl’s release by promising the reciprocal release of prisoners from Guantanamo Bay, Carney said that was not the case. “He was not a hostage,” Carney said of Bergdahl. “He was a prisoner.”

Carney began by noting that securing Bergdahl’s release had grown more urgent as his health had begun to deteriorate. When asked if examinations on him since his release have substantiated U.S. concerns about his health, Carney said that it was best to allow the former Taliban captive to “recover privately.”

RELATED: Bergdahl’s Parents in Teary Conference: ‘Proud of How Far You Went to Help Afghan People’

“Why not just call this what it was?” Cuomo asked. “You negotiated with these terrorists because he is a prisoner of war and you have this pledge of leaving no man or women behind?”

“He was not a hostage, he was a prisoner,” Carney added.

The press secretary said that the threat posed by the released Guantanamo detainees has been “sufficiently mitigated” and told Cuomo that travel bans were in place so that these previously detained terrorists will not be able to attack American interests again.