Carney: ‘It Is Not a Concession to Keep the Government Open’
VIDEO

Carney: ‘It Is Not a Concession to Keep the Government Open’ 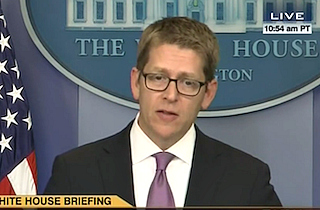 White House Press Secretary Jay Carney emphatically told ABC White House Correspondent Jonathan Karl on Monday afternoon that the GOP’s position on the continuing resolution delaying or defunding ObamaCare was by definition not a compromise, as keeping the government open was “not a concession.”

“Nothing is negotiable when it comes to the debt ceiling,” Carney said. “And as the president said recently, when it comes to extending the government, he’s willing to talk about ways to improve the health care law if the Republicans are interested in that…What he’s not willing to do is have that under the threat of shutting down the government and not defaulting on our obligations.”

“Is the reason why we’ve seen no negotiations going on,” Karl began, “is because everything the Republicans have put out there is—”

“But that’s not a negotiation,” Carney insisted. “Here it is: it is not a concession to keep the government open. It is not a concession to pay America’s bills. That is a responsibility. It is enshrined in the Constitution. Congress has power to pay debts, Congress has the power to authorize funding. If it were otherwise the president would go about it and there would be no drama and no delay.”

“What is the president doing over these next several hours to try to keep the government running?” Karl asked.

“Again, it is not, unfortunately, within the president’s power to pass legislation on the Hill,” Carney replied. “The president said just moments ago that he will certainly be having conversations with leaders in Congress. But it is pretty elemental, here. There’s an option to keep the government open, there’s an option to shut it down for ideological reasons. He would not presume to have the power of persuasion within the House Republican caucus that perhaps John Boehner does or perhaps others in that conference might have.”