Carney: Obama Could ‘Play the GOP Game’ and Attach Gun Control to Budget, But He Won’t 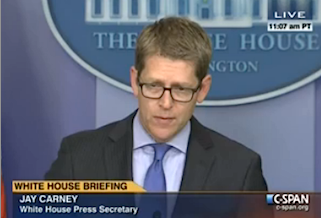 In his first press briefing since the government shutdown, Jay Carney echoed much of what President Obama said in his earlier Rose Garden address about the failure of House Republicans to pass a budget resolution that did not defund or delay the Affordable Care Act. Following a question about who Americans will blame for the shutdown, Carney highlighted a key difference between the negotiation tactics of the president and the GOP.

“Here’s what the president is offering Republicans,” Carney said. “He’s offering them no conditions attached to reopening the government, no conditions attached to raising the debt ceiling.” He said that if Obama were to “play the Republican game” he might do something like say “I won’t sign a bill that funds the government unless you pass legislation that 90% of the American people support, which is to extend background checks on gun purchases.”

“But, he won’t do that,” Carney continued. “He believes that kind of thing should be done through the legislative process, the normal legislative process. We had that fight and he continues to press for Congress to pass an expansion of background checks, but he would not do that.”

Carney emphasized that it’s Republicans, not the president, who are making “demands” in order to keep the government running. “The House Republicans have the opportunity to reopen the government five minutes from now if they wanted to take that action,” Carney said. “We hope they do.”