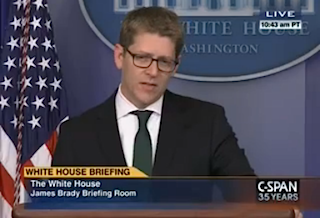 Early this morning, we posted a video of Russian state TV anchor Dmitry Kiselyov standing in front on a large image of mushroom cloud and calmly informing his audience that “Russia is the only country in the world realistically capable of turning the United States into radioactive ash.”

During this afternoon’s White House press briefing, ABC News’ Jonathan Karl read Kiselyov’s quote aloud to Press Secretary Jay Carney to gauge his reaction to it. “I mention this because this is state-controlled Russian television, which as we know, does not generally broadcast stuff that is not signed off at the government of Russia,” Karl noted.

“We will focus on the actions of the Russian government,” Carney said.”We are focused on the aid we are providing to the Ukrainian government. We are focused on marshaling a strategy with our partners around the world, especially in Europe, for how to deal with this challenge posed by Russia. And we are making sure that Russia is incurring costs for the provocations it has engaged in and the actions it has taken. That’s what we’re focused on right now. Those costs are real and they will increase if Russia continues down this path.”

Carney’s answer was good, but nothing could top the reaction of the reporter seated to Karl’s left, who had clearly not seen the Russian TV clip, when he uttered the words “radioactive dust.”

And watch the original clip from Russia’s RIA Novosti below: