Carney Responds to PolitiFact ‘Lie of the Year’: Year-End Lists ‘Always Fun’ but Not History-Making
video

Carney Responds to PolitiFact ‘Lie of the Year’: Year-End Lists ‘Always Fun’ but Not History-Making 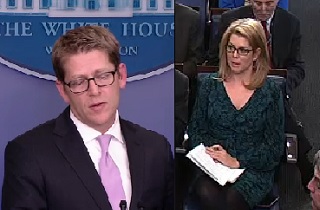 On Thursday, fact-checking website Politifact announced its 2013 “Lie of the Year,” which they say was “If you like your health care plan, you can keep it,” a promise made frequently by President Obama the last several years. At Friday’s White House daily briefing, CNN’s Brianna Keilar asked Press Secretary Jay Carney if the White House is concerned that the ruling will be “written in history books,” to which Carney replied that the historical assessment of this period will not “depend on end-of-the-year lists,” which he said are “always fun.”

Brianna Keilar began by referencing PolitiFact’s announcement, and asked, “Is the President worried that this false promise is being cemented in history?”

Carney replied that the President had addressed this in an interview last month, and had “expressed his concern for those individuals, those Americans who received cancellation notices,” and that he “took action to encourage states and state insurance commissioners” to allow those plans to continue.

He added: “End of the year categorizations like that are always fun, even when they don’t gibe with past characterizations of the very same statement.”

PolitiFact had previously rated an almost identical statement “Half-True,” and in making the announcement, Politifact editor Angie Drobnic Holan told CNN’s Jake Tapper that “the original statement is partly accurate,” but that when the President clarified it this year, “we found 37 separate instances where he said clearly with no caveats that you could keep your plan. And that got the pants on fire rating. That excuse”

Keilar continued: “One of the ‘Lies of the Year’ was Sarah Palin‘s ‘Death Panels,’ and it sort of highlights something that becomes a line in public consciousness,” adding that “it’s something that will be in history books. Is there a concern about that?”

Carney responded that the White House is concerned with “the problems with the rollout of the Affordable Care Act,” adding “I don’t think that history’s assessment of this period will depend on end-of-the-year lists,” but rather on “how we responded to the absolute necessity of making the fixes to Healthcare.gov, the absolute necessity of responding to the problems of those who received cancellations, and the absolute necessity of ensuring that we are making it possible for the millions of Americans who have clearly demonstrated their desire for, and interest in, enrolling in health insurance plans through the marketplace, that they are able to do that, and that will be the test in the long run.”

Here’s the clip, via NBC Livestream: