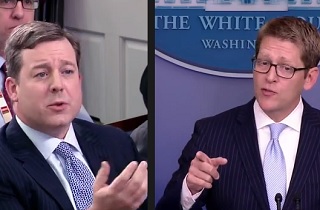 2012 Republican presidential nominee Mitt Romney penned a 2008 op-ed in opposition to the government rescue of the auto industry entitled “Let Detroit Go Bankrupt,” a sentiment which then became a hotly-contested issue during President Obama’s successful reelection campaign against Romney. On the heels of a federal judge’s ruling that clears the way for the city’s Chapter 9 bankruptcy, Henry brought the phrase back. As soon as Carney called on him, Henry asked “Jay, is the President going to let Detroit go bankrupt?”

A taken-aback Carney replied, “Ed, I think that happened a while ago.”

“As we said, Detroit’s bankruptcy is something that needs to be resolved between the city and its creditors,” Carney cut in. “What we have said, and what we are doing, is working to provide real, tangible economic development and opportunity with existing resources and public-private partnerships to support and accelerate Detroit’s revitalization.”

“Well, I think that there is enormous hardship caused by some of the problems that have happened in Detroit,” Carney agreed, “which is why this needs to be resolved between the city and its creditors. Our position on this is the same as it was prior to the judge’s ruling and prior to — or in the immediate aftermath of the declaration of bankruptcy.”

Henry then told Carney about some criticism from Senate Minority Leader Mitch McConnell (R-KY) about the number of times the President has pitched health care reform to the public. Then, Henry asked “Do you feel like he’s just sort of stuck in the same place, and that you’ve made this pitch before, and people just are still not buying it?”

An emphatic and irritated Carney replied “Really? Because the law passed. The President won reelection. The Supreme Court upheld it. And a million people showed up on the website yesterday. And guess what — 380,000 showed up before noon today. And people are enrolling every day.”

Above Henry’s attempts to follow up, Carney continued. “And Senator McConnell to this day has yet to put on the table a single idea to provide affordable, quality health insurance to the American people,” Carney said. “Senator McConnell, I guess, by highlighting this — clearly a political thing — doesn’t want to engage in a debate about whether or not folks who are uninsured ought to have access to quality, affordable health insurance; whether folks who are in states where governors for political reasons chose not to expand Medicaid should have to answer for why their constituents are being denied coverage.”

“You’ve laid out at the top of the briefing all the great benefits of this,” Henry asked, “So why does the President still have to sell it? If it’s so great, why don’t people already…”

Coca Cola, a very popular product, spends in excess of $4 billion annually on marketing, and pharmaceutical companies spend tens of billions of dollars on advertising, even though their products can only be sold if a consumer’s doctor says they can. On the other hand, not all of the top ten advertisers in the country are universally beloved.

“Well, one reason that we’ve — I think you’ve noticed and covered,” Carney conceded, “is that we’ve had a pretty rough go the last couple of months with the rollout of the Affordable Care Act’s marketplaces.”

“You’ve been selling the benefits for three years, before the website,” Henry cut in. “You know that.”

Carney contrasted the health care reform law with the previous status quo, and added “There is no question — and you’ve covered it, I’ve covered attempts to pass health insurance reform in the past. This is a contentious, very political issue here in Washington. But what I can promise you is that around kitchen tables, including in houses where families have tried and struggled with the website in October, including in households where everyone who’s an adult voted against President Obama, people are going to make a decision if they need quality, affordable health insurance and don’t have it, they’re going to look at the options available to them and choose the certainty and security that comes with quality, affordable, private health insurance. It’s as simple as that, and that’s what we’re focused on.”