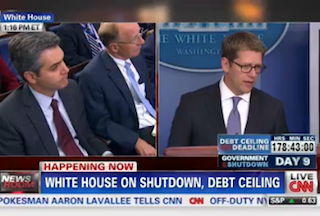 White House Press Secretary Jay Carney may have prevented President Obama from taking questions from the major TV reporters during his hour-long press conference yesterday. But during Carney’s daily briefing today, he gladly fielded inquiries from the front row of the White House Press Corps, including CNN’s Jim Acosta, who asked about the news that military families have not been receiving death benefits during the government shutdown.

“I thank you for the question,” Carney began, explaining that the Department of Defense had informed Congress prior to the shutdown in payments “that the department would be legally unable to pay death benefits were there to be a lapse in D.O.D. appropriations.”

“Unfortunately, this issue was not explicitly addressed as part of the pay our military act,” Carney continued. “The president was very disturbed to learn of this problem and he directed the Department of Defense to work with the office of management and budget and his lawyers to develop a possible solution and he expects this to be fixed today.”

Through the rest of the press conference, several reporters attempted to get Carney to nail down exactly when Obama learned of the problem, but Carney would only say that once the president found out about he has acted swiftly to correct it.

The issue was notably absent from President Obama’s press conference, when the wire, print and online reporters he called on failed to bring it up. When the president stopped taking questions after a little more than an hour, several of the major TV correspondents could be heard shouting questions about military death benefits at Obama as he walked away from the podium.