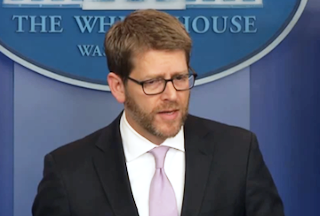 As he certainly could have anticipated, White House Press Secretary Jay Carney was faced with questions at Wednesday’s press briefing regarding various statements President Barack Obama made to David Remnick in this week’s New Yorker profile. One of those questions concerned what appeared to be news-making statements from Obama endorsing the legalization “experiments” currently unfolding in Colorado and Washington state.

“The president’s position on these matters hasn’t changed,” Carney assured the reporters in the room, before laying out the points Obama was trying to make with his statements. He said it’s important to look at the president’s full comments, rather than taking individual soundbites out of context.

When the reporter who initially asked the question pushed back, making sure Obama does want to see the “experiments” in Colorado and Washington go forward, Carney said, “You’re probably not aware of the entire sentence,” before reading Obama’s full quote from the piece:

“It’s important for it to go forward because it’s important for society not to have a situation in which a large portion of people have at one time or another broken the law and only a select few get punished.”

“He’s not endorsing any specific move by a state, he’s simply making an observation.” Carney said. “His position on these matters has not changed.”

In his interview with Remnick, Obama also said marijuana was less dangerous than alcohol “in terms of its impact on the individual consumer.” But at the same time, he added, “It’s not something I encourage, and I’ve told my daughters I think it’s a bad idea, a waste of time, not very healthy.”