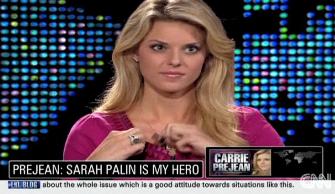 When you agree to an interview with CNN’s Larry King, you better come correct, because that guy will nail you – with softballs.

Author and preachy solo sex tape performer Carrie Prejean found that out last night the hard way, as she fell prey to the ‘tough’ questions from King and almost walked off set.

As he took a call from someone who introduced himself saying, “I am a gay man and I love pageants,” Prejean could be seen mouthing to someone off set that she was “going to leave” and removed her microphone. But she didn’t take out her IFB earpiece, so when she seemed to have a change of heart and stayed sitting in her chair, she could hear King asking her what she was doing and spoke loudly in response, presumably so a studio mic would pick up what she said. The whole thing was bizarre, and only made more so by the fact that she was back after the commercial break for a couple final minutes.

Here’s what happened when King returned:

The whole thing is much more awkward on video, and is only made more ridiculous by the fact that, while Larry King is a legend, he isn’t known for nor did he present her with hard hitting questions. Then again, it wasn’t exactly the comfort of a Sean Hannity interview.

Here’s the key part of the interview (and as a side note: the new CNN.com is getting very aware of giving the people what they want – the video below was promoted on the homepage and is headlined “Carrie Prejean gets mad!”):