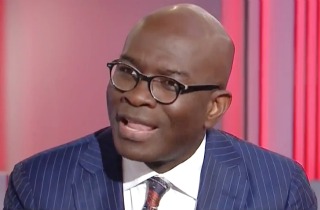 Ben Carson adviser and business manager Armstrong Williams appeared on CNN this afternoon to talk about major Carson aides resigning––one of whom specifically cited Williams in his reasons why.

Williams has very close ties to Carson, but he is independent from Carson’s actual campaign, which has apparently been a source of frustration for now-ex-campaign manager Barry Bennett, who resigned today along with communications manager Doug Watts and deputy campaign manager Lisa Cohen.

In an interview with Time, Bennett said his “frustration was boiling over” and the final straw was Williams setting up the interview where Carson said every job was on the table. Bennett was unaware that interview was happening, and he said it was “stupid” to get all staffers worried like that during Christmas week.

He kept going off on Williams, and when asked why Williams has such an influence on Carson, Bennett said, “I don’t know. I think they need some psychologists to figure that out.”

On top of that, an anonymous source close to the campaign told NBC News Williams has been an “ongoing problem since day one.”

Well, Williams appeared on CNN this afternoon, and right away Jim Sciutto confronted him about being blamed. Williams said that most presidential campaigns are “chaotic,” touting how Carson “remains in charge” and how he purposely has advisers outside of the campaign apparatus.

He also got in a few digs at Donald Trump and Ted Cruz, saying unlike them, Carson is “authentic” about his faith, and that they say too many “incendiary” things.

Williams also flubbed a little when he said Carson will “be more authoritarian in the way that he speaks.”