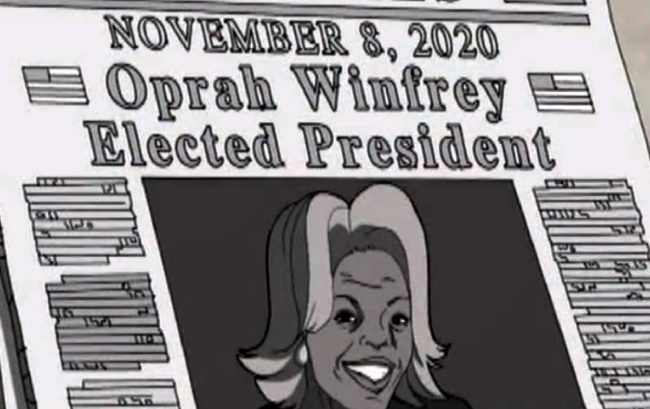 While the nation has been taken by storm over the possibility that Oprah Winfrey might actually run for president in 2020, it appears that this prospect isn’t a surprise to at least one person — Aaron McGruder, creator of The Boondocks.

As highlighted by CNN and the Washington Post this morning, an episode during the groundbreaking first season of the cartoon series included a scene featuring a 2020 newspaper headline which reads: “Oprah Winfrey Elected President.”

The 2006 episode, titled ‘Return of the King,’ presents an alternate timeline in which Dr. Martin Luther King Jr. is still alive — waking from a coma 32 years after being shot in an assassination attempt. After attempting to start a new political party, he eventually grows disenchanted and moves to Canada, but not before delivering a rousing speech that inspires African-Americans to engage in widespread protests.

The program ends with a scene of young black citizens demonstrating outside of the White House, followed by news that Dr. King has died in Canada and Winfrey has been elected.

The Boondocks isn’t the only cartoon to predict a celebrity president. Back in 2000, The Simpsons included a scene based in 2030 in which President Lisa Simpson bemoans the “budget crunch” she inherited from former President Donald Trump.