Casey Anthony Prosecutor Jeff Ashton On Verdict: ‘A Shock’ And ‘Not Easy To Hear’ 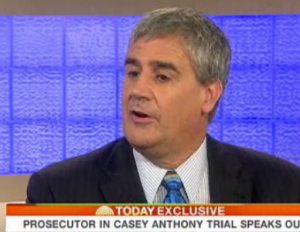 In his first public comments since the jury verdict in the Casey Anthony murder trial, prosecutor Jeff Ashton told NBC’s Matt Lauer this morning that going into the courtroom–with jurors coming back after just eleven hours of deliberation–“we were feeling pretty good. We didn’t feel that a not guilty verdict in that short a period of time was realistic, but that’s the jury system.” Ashton, whose work in delivering an emotional and powerful closing statement in the case was hailed by commentators, admits he was “shocked” by the jury’s not guilty verdict. “You pour three years of your life into a case, and as a prosecutor you don’t take a case unless you believe in it…it was not easy to hear.”

Ashton says he still feels the case he and his team presented to the jury was strong, and he has not changed his mind on making it a first degree murder case. Speaking of defense attorney Jose Baez, and his opening statement telling jurors Casey Anthony was molested as a child by her father–which never came up in testimony–Ashton gives Baez the benefit of the doubt. “I assume he said that because he honestly believed he could prove that, and something changed.”

As for the story that Caylee Anthony died accidentally in the family swimming pool, Ashton said “I cannot believe that.”

Ashton has announced his retirement. He also told Lauer it will be a tough call to decide whether Cindy Anthony will face perjury charges for her testimony in the case.