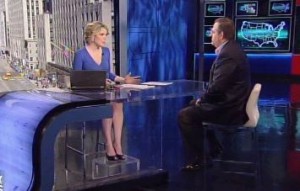 On the heels of CBS News’ gut-wrenching interview of seven Newtown families on 60 Minutes, Fox News interviewed pro-gun parent Mark Mattioli, whose son James was killed in the mass shooting at Sandy Hook Elementary School. Megyn Kelly‘s full interview with Mattioli is similarly heartrending, but there were also some uniquely revealing moments in the apparent first interview of a pro-gun Newtown parent. Asked about banning extended magazines, Mr. Mattioli argued that there are too many in circulation to do any good, without confiscating the existing ones, and offered one of the few affirmative defenses of the magazines that I’ve heard.

Some of what Mr. Mattioli said had the familiar ring of NRA boilerplate, but with the moral authority of a grieving parent that makes it impossible to dismiss with a sneer and a muttering of “gun nut.” For example, Mark Mattioli told Megyn Kelly that gun regulation is “a false premise,” because  gun control works for people who abide by the laws. Criminals who conduct most of the gun crime don’t care about the law. they won’t look up the Connecticut law to see how many guns, how many bullets have to be in the magazine that they’re supposed to register with the state police at some point in the future, once they come up with a blueprint for how to administer that.”

Normally, this argument simply reeks of bad faith, but coming from someone like Mark Mattioli, it’s obvious that there are people who sincerely believe this fundamental misunderstanding of how laws work. There are no laws designed to eliminate all crime via voluntary surrender. We don’t make laws against heroin because we think criminals will look up that law and surrender their drugs, we do it so that when the police do catch someone with heroin, they can take it away from them before it kills someone.

Similarly, if extended magazines are federally banned the way they now are in Connecticut, those already in circulation would need to be registered by the law’s effective date. After that, with no new magazines being sold and manufactured, police could take them away from people who weren’t supposed to have them, eventually reducing the supply to those who had lawfully registered them.

We also make laws to adjust the behavior of law-abiding citizens. Regardless of the supply in circulation, there’s every indication that Nancy Lanza was a law-abiding citizen, and would not have sought banned magazines for her weapons. As the Newtown parents in that 60 Minutes interview pointed out, smaller magazines could have provided more opportunities for children to escape, as 11 of them did on December 14 when the shooter was reloading.

Megyn Kelly asked Mattioli about that possibility. “All right, so, again,” Mattioli replied, “false premise in that they’re not talking about confiscating the magazines, they’re out there. If we were starting out at point a and there were no magazines, but we’re not talking about that. There are millions, tens of millions out there, and criminals aren’t going to hand them back.”

This is the circular nature of the NRA’s argument in a nutshell, the Catch .223; they have constructed a political environment in which they lobby against any and all regulation, then when a compromise is offered, they argue that the proposed law isn’t strict enough to do any good. It’s true, a ban on high-capacity magazines would work best if all non-registered magazines were confiscated immediately, but even without that, as I explained earlier, police would be able to take them away from people as they encountered them, hopefully before they’re used to kill people.

But unlike most pro-gun advocates, who simply argue they should have the extended mags because they believe they have the right to, Mark Mattioli actually offers an answer to the question that fellow Newtown father Neil Heslin asked several months ago: why anyone needs these weapons and magazines.

“Why should I be hampered in protecting myself when someone could come to my home and outgun me?” Mattioli told Kelly. “Should I feel safer because New York criminals will only be loading seven bullets in their 15 round magazines? I don’t think so.”

Practically speaking, of course ,there has never been a civilian who needed more than 10 rounds for an act of self-defense, and again, in practice, Mr. Mattioli’s right to own extended magazines didn’t save anyone’s life, and never has. The right that he shared with Nancy Lanza did, however, result in Mrs. Lanza’s son not having to reload as many times, which meant that only 11 children were able to escape, rather than even just one more child having a chance to live.

Even as he argued that criminals just ignore laws, Mr. Mattioli offered a seemingly contradictory solution, telling Kelly that “I talked to the U.S. Attorney, David Fein for Connecticut, and I said, you know, increase mandatory minimum sentences on gun related crime. That does it, you don’t need a new law, you need to enforce the laws that you have.”

These are things we’ve heard a million times before from the likes of Wayne LaPierre, but they take on a different cast when uttered by what has to be a good-faith actor. If Mark Mattioli is in favor of existing gun laws, and thinks the key to their efficacy is mandatory minimums, then logically, he ought to support the laws that are being debated in Congress. The assault weapons ban, the ban on magazines, and background checks are all based on existing law, and are an improvement on it. None of these are “new laws.”

But Mark Mattioli doesn’t see it that way, and neither do many other Americans. At least now, though, he is not being shut out of the conversation, and that’s a good first step. The Newtown parents, all of them, deserve to have legislators look them in the eye, and they all deserve a vote.

Here’s that portion of the interview, from Fox News: