‘Catfight on a Colored Girl’: Sons of Anarchy Exploits Racism for Cheap Shock in Season Finale 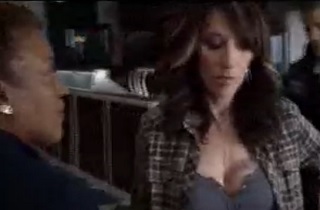 The FX drama Sons of Anarchy has just wrapped up a season in which it did countless unspeakable things to the proverbial shark (for the sake of your liver, you should now only take a drink when someone doesn’t get “unexpectedly” shot in the head), but on Tuesday night’s season finale, the show crossed yet another line when Katey
Sagal‘s Gemma Morrow character said, of CCH Pounder‘s District Attorney Tyne Patterson, “I’m about to go catfight on a colored girl,” and then responded to her greeting with “Kiss my white crack.”

While showrunner Kurt Sutter would likely defend the jarring scene as a nod to “authenticity,” the show’s history with racism says otherwise. Sutter has acknowledged that the inclusion of racism in the show is necessary for authenticity’s sake, but like much of the biker gang’s worst behaviors, it is whitewashed through a variety of means. Most often, the show plays the whites-only Sons of Anarchy’s racism as a fact of life born out of prison yard-style necessity that can be overcome by pragmatic concerns, or a vestigial artifact of their culture that some members aren’t ready to abandon yet.

In one story arc, the character Juice Ortiz finds out his absent father was black, and in a neat little extra-racist twist, is being blackmailed by a black sheriff to betray his gang, under threat that his secret will be revealed to that gang. Juice murders to keep his secret, and eventually tries to kill himself over the issue, but the whole thing is wrapped up with almost Afterschool Special-style warmth when one of his fellow bikers learns his secret, and tells him its ok if he just continues to pass. In many ways, it was an ingenious bit of plotting that could have actually seemed insightful in a different context.

However, the show doesn’t portray racism as it actually exists in these settings, pervasive and ugly. Instead, it is euphemized in the background of the plot, dipped into perfunctorily from time to time, and relentlessly mitigated. Sutter takes pains to show how, despite their strict tribal lines, the rival biker gangs can work together if need be, and constantly shows gang leader Jax Teller getting hood-passy street respect and displays of grudging affection from his black and brown rivals. SoA is adept at this sort of apologia. The gang is sexist and misogynistic, but affectionately so, and every act of brutality is either the result of some complex moral quagmire, or because they just had no other choice.

Gemma’s outburst last night is how the show ought to have played the racism all along (although “colored” is not the worst of what these characters would say), so to drop “authenticity” in six years too late is the tell that this is nothing more than shock masquerading as edge.

Sutter has wrapped his show’s escalating depravity in his Shakespearean conceit, but those who were drawn in by Sons of Anarchy‘s superbly-acted, well-produced drama should realize that the social issues it tramples over, like the racism, or the school shooting from this season, or the sugarcoated misogyny that was on full display during one particular death scene last night, are mere set dressing for the narcissistic arc of the fetishized biker gang. Nothing more to see here.

Here’s the clip, from FX: