Catherine Zeta-Jones Will See You Next Tuesday
video

Catherine Zeta-Jones Will See You Next Tuesday 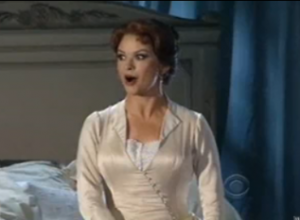 Singing “Send In The Clowns” from A Little Night Music, she sang: “Isn’t it bliss? Don’t you approve? One who keeps tearing around…one who can’t move.” Except it sounded like she sang…well, that. Now before you go accusing me of bringing my own biases into it, consider that this may be one of the most-covered Broadway songs ever, sung in concerts and musical revues and pretty much any Sondheim tribute concert ever. So I have heard it. Many times. Watched it on YouTube, listened to it on various Broadway compilations (this one especially), pulled the sheet music like a dork and gave it a whirl as a 20-year-old who had absolutely no idea what that song was really about, heard alcohol-fueled renditions by drunken aficionados of both sexes during my stint as a singing waitress at this bar, which is another story entirely. The point is, I know this song — well enough to note the missing lyrics (don’t you love farce, who could forsee etc.) and wonder if CZJ would see the clowns next year or not bother because they’re here.

The point is, I heard it — and then rewound just to make sure I wasn’t imagining it. Would I have made the leap without the recent Today Show kerfuffle? Yep — I can hear English (and English accents, which sound like “cahn’t” – maybe this was a Welsh thing? Conservative-columnist-whom-I-first-knew-as-a-theater-dude Mark Steyn notes “a rather brusque Anglo-Welshness in the vowel sounds”). So maybe I would have left it at just a tweet except then Zeta-Jones won the Tony for Best Actress in a Musical, and in the excitement of her acceptance speech exclaimed, “I’m losing my voice! But I’ll be on stage on Tuesday don’t worry!” So don’t worry, theatergoers, she’ll see you next tuesday!

Yes. I am a child. But one who is highly, highly amused right now. Maybe next time Jane Fonda will play the role. Until then, there’s always the Today Show.

Decide for yourself below:

…and compare and contrast:

Related:
Panel Nerds: A Funny Thing Happened on the Way to Being Stephen Sondheim [Mediaite]
Send In The Clowns [SteynOnline]