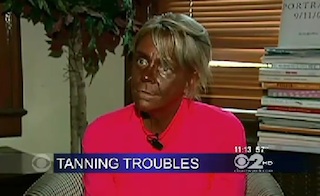 Look, I grew up in New Jersey. I remember when our town got its first local tanning salon. I remember when girls in my high school class suddenly started appearing…orangey and acting as if that was somehow supposed to be sexy and not reminiscent of mustard gas victims (we were studying WWI at the time). I remember all of this and, yet, I was still not prepared for this WCBS segment about a tanning “obsessed” mom who was arrested for tanning her six-year-old daughter. How bad is it? At first I thought I was watching a news segment about a racist Vaudevillian who had a bad allergic reaction to her blackface makeup.

It doesn’t help that the story itself is pretty sad. The woman’s daughter suffered a slight burn. When the school nurse asked where she got it, the young girl made some comment about going tanning with her mom. The mother vehemently denies it, claiming that this is all a mix up, but this might be a case where it’s tough not to judge a book by its horribly scarred cover.

Maybe I’m biased because I still don’t know what those girls in my high school were thinking. Maybe this woman just overdid it a bit and I’m the weird one. I don’t know. All I do know is that watching this segment reminds me of watching a bad kids’ movie. You know the ones; where one character asks another if he stole their ice cream, the second says no, but he’s got ice cream all over his lips. It’s a lot like that only if the ice cream covered the character’s entire body and turned it a color normal humans were not meant to be.

Check out the segment from New York’s WCBS below: