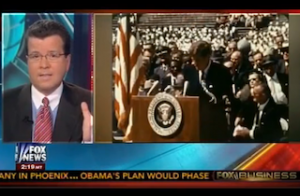 With everything that’s happening this week regarding terror threats across the globe, Fox News’ Neil Cavuto asked if now is the best time for President Obama to appear on the Tonight Show with Jay Leno as he’s scheduled to do tonight. “Is now the time to be doing this,” Cavuto asked, “especially if, God forbid, something bad were to happen and in retrospect we’re seeing him kibitzing with Jay Leno?”

Townhall.com’s Scottie Nell Hughes revived Newt Gingrich’s old talking point that with his sixth appearance on Leno’s couch, the president seems “more like the Entertainer-in-chief” than the Commander-in-chief.”

Democratic consultant Jehmu Green took the opposite position, saying the best thing Obama could do is go on a popular show like this one and tell the American people, “the only thing to fear is fear itself.” She said the president “is sticking it to the terrorists by saying we’re not going to be frozen by fear, we’re not going to cower in the face of all of this chatter that’s going on.”

Using an analogy that dates back to a very different media landscape, Cavuto admitted that during the Cuban missile crisis, President John F. Kennedy “continued business as usual, tried not to alarm the American people.” But at the height of it, he “was holed up in the White House dealing with the crisis, and he wasn’t appearing on Jack Paar at the time.”

For the record, Jack Paar hosted his last Tonight Show on March 29th, 1962. By the time the Cuban missile crisis was underway in October, a young man Johnny Carson had just taken the reins. While Kennedy did in fact sit down with Paar when he was a presidential candidate in 1960, President Obama became that first sitting president to appear on the show in 2009.