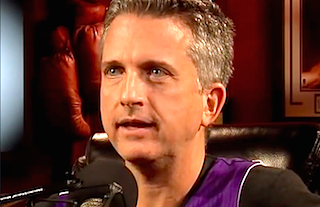 Bill Simmons is still under contract with ESPN until September, with the network essentially paying him to do nothing and preventing him from doing much of anything else. But in the meantime, speculation about where fired editor, commentator and podcaster might end up is still going strong.

At a Paley Center panel in New York on Wednesday, the heads of CBS Sports, NBC Sports and Fox Sports were all asked if they would be open to hiring Simmons to work for them. Only one of three was even willing to keep that door open.

Only Fox Sports President Eric Shanks would admit that he has met with Simmons “once or twice” over the past few years and said “we’ll have to wait and see” in response to possibility of him coming onboard the network.

RELATED: Why Can ESPN’s Keith Olbermann — But Not Bill Simmons — Trash Roger Goodell?

As Mediaite’s Joe Concha predicted earlier this month, Turner Sports, with TNT, TBS, HBO and CNN under its wings, is the most likely home for the NBA-obsessed Simmons.

Meanwhile, Simmons’ voice can still be heard at Grantland in the form of a series of Summer Movie Preview videos he taped weeks ago with Chris Connelly and Wesley Morris that continue to roll-out on the website’s YouTube page. Watch the latest episode below: