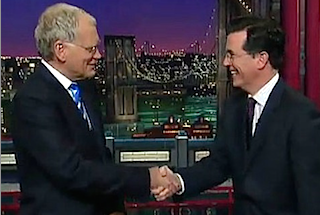 CBS just made it official. Stephen Colbert will succeed David Letterman in the 11:35pm time slot currently occupied by the Late Show when Letterman retires in 2015. Colbert, who will end his Comedy Central show The Colbert Report after nearly 10 years on the air, was rumored to be the front-runner for the job shortly after Letterman made his announcement.

#CBS Announces Stephen Colbert As The Next Host
Of "THE LATE SHOW” http://t.co/ZBsYkV4pK3

“Stephen Colbert is one of the most inventive and respected forces on television,” CBS head Les Moonves said in a press release. “David Letterman’s legacy and accomplishments are an incredible source of pride for all of us here, and today’s announcement speaks to our commitment of upholding what he established for CBS in late night.”

“Simply being a guest on David Letterman’s show has been a highlight of my career,” Colbert said. “I never dreamed that I would follow in his footsteps, though everyone in late night follows Dave’s lead. I’m thrilled and grateful that CBS chose me. Now, if you’ll excuse me, I have to go grind a gap in my front teeth.”

According to CBS, the Colbert-hosted version will continue to be called The Late Show, but there is no indication that Letterman’s production company Worldwide Pants will continue to produce it.

Presumably, Colbert will host the Late Show “out of character” — as himself rather than as the right-wing pundit who hosts The Colbert Report. To see what that might look like, here are five times Colbert has appeared out of character in the media.

Comedy Central is proud that the incredibly talented Stephen Colbert has been part of our family for nearly two decades. We look forward to the next eight months of the ground-breaking Colbert Report and wish Stephen the very best.