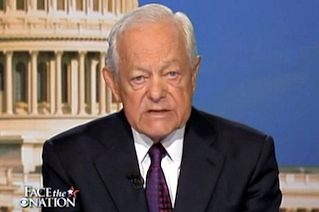 In his weekly commentary Sunday morning, CBS’ Face the Nation host Bob Schieffer lamented the loss of America’s standing in the world, due not to disastrous foreign escapades but to our inability to effectively execute our domestic chores.

“America has always led best when we led by example,” Schieffer began. “We built the greatest arsenal of weapons the world has even known during the Cold War, and those weapons kept the Soviet Union at bay. But it was not the weapons that won the war but the example we set. When the people on the other side of the iron curtain were finally able to look across it, they saw that our system provided a better life, and so the Wall came down. They didn’t want rockets and bombs, they wanted dishwashers and better schools. The Communist system couldn’t provide it, our system could. They wanted the American model.”

“But as I look at the growing list of things Washington has made a mess of lately—immigration reform, food stamps, farm aid, student loans, deficit reductions, a tax system regardless of its fairness or unfairness so complex no one can understand it, a health care plan that even the administration that passed it can’t figure out how to administer, an Air Force where a third of the combat squadrons are grounded because Congress can’t figure out how to fund them—I have to wonder: who would want to be like that?”

“In this day, when we are telling others how to run their countries, what do other countries think of the model we are presenting?” Schieffer concluded. “I still think of America is the greatest country in the world. But convincing others of that is probably a harder sell than it used to be.”