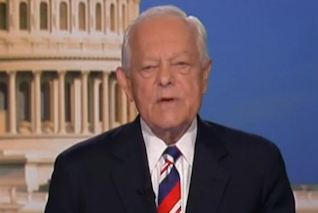 Face The Nation host Bob Schieffer dressed down the Obama Administration on Sunday morning, in a terse critique that skipped the easy shots but did not spare the president.

“People often ask me,” Schieffer said, “of all the administrations you’ve covered, which was the most secretive and manipulative? The Nixon Administration retired the trophy, of course. Since then my answer is which ever administration is currently in power.”

“Information management has become so sophisticated every administration learns from the previous one,” Schieffer continued. “Each finds new ways to control the flow of information. It’s reached the point that if I want to interview anyone in the administration on camera—from the lowest-level worker to a White House official—I have to go through the White House Press Office. If their chosen spokesman turns out to have no direct connection to the story of the moment—as was the case when U.N. Ambassador Susan Rice was sent out to explain the Benghazi episode—then that’s what we, and you the taxpayer, get, and it usually isn’t much.”

“So I am glad the president has asked the attorney general to review whether his investigations into leaks is having a chilling effect on journalists,” said Schieffer in closing. “But it shouldn’t stop there. The president needs to rethink his entire communications policy top to bottom. It is hurting his credibility and shortchanging the public. And to head the review, how about someone other than the attorney general whose department is so deeply involved? That makes no sense to me.”

Watch the whole segment below: